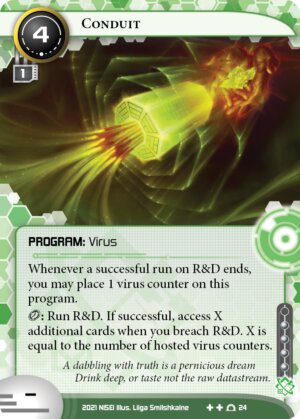 Whenever a successful run on R&D ends, you may place 1 virus counter on this program.

click: Run R&D. If successful, access X additional cards when you breach R&D. X is equal to the number of hosted virus counters.

A dabbling with truth is a pernicious dream
Drink deep, or taste not the raw datastream.
Illustrated by Liiga Smilshkalne
Decklists with this card

This card is basically like Medium, which we saw for a little while in the Salvaged Memories meta. Conduit is great and really belong to shapers, as shown with the 4 influences cost. It is so good, in fact, that it is still worth it to use it in other factions.

The other current near equivalent program would be Stargate. But Conduit let you see more and more card, the more you run. Because it is vulnerable to purges, it combo very well with Contaminate, since the latter cost only 1 influence.

Shaper will leverage the card with efficient runs on R&D. But Conduit really shine with anarch. Using tools like Cookbook, Knobkierie, Contaminate, Virus Breeding Ground and even Friday Chip, you can build up a massive amount of virus tokens on Conduit, letting you access an equally massive amount of cards in R&D.

At only , unlike the of Stargate, it is easy to put in a deck. Being a virus, it can even be fitted on Knobkierie or MemStrips (again, Anarch have it better).

I really enjoyed the short poem, it is very nice. The art is sharp and easy to understand on the table. Well balanced card. Gread design.

Conduit is a powerful and economically grueling form of RND pressure. It is tournament viable, albeit expensive to keep it operational. Corp players have some good counters (Cyberdex Virus Suite is used by 62% of corp players as of ban list 21.06, and Macrophage is used by 23%).

Conduit is mostly a reprint of Medium in Shaper, but with a slight nerf. With Medium, you could have used run events like Dirty Laundry or Out of the Ashes or Overclock or Mobius, but with Conduit the run has to be made through Conduit. In addition, from Anarch's perspective, the 4 influence cost is real rough, you'd have to make a huge commitment to import this. Also, Medium allowed you to set a lower number of accesses if you wanted, a helpful safety feature in some matchups.

In Anarch, you could easily use Stargate instead. Some reasons you might use Medium anyway:

Flavor: the poem is a reference to Alexander Pope's Essay on Criticism ("A little learning is a dangerous thing; drink deep, or taste not the Pierian spring"). Given the Apocalyptic nature of this card, I would have gone with a biblical reference instead: "Where's your Macrophage now?"