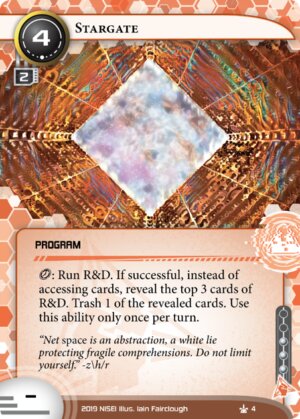 click: Run R&D. If successful, instead of breaching R&D, reveal the top 3 cards of R&D. Trash 1 of the revealed cards. Use this ability only once per turn.

"Net <em>space</em> is an abstraction, a white lie protecting fragile comprehensions. Do not limit yourself." -z\h/r
Illustrated by Iain Fairclough
Decklists with this card

As someone who played during the format when Keyhole anarch was predominant, I was very happy to see that card rotate. It led to very tiresome games where as a corp you were locked out of any line of play, as well as having to shuffle your deck dozens of times over the course of a match. So when I saw we're getting a replacement for Keyhole, I was hesitant at best and ready to bring out my pitchfork and torch at worst.

Will Stargate be as prone to being a NPE as Keyhole though? Maybe? Let's look at the card with an open mind.

First off, the numbers on it are identical to its predecesor. 4 to install, 2 MU program, 3 influence, look at 3 cards and trash 1. This does require you to have some spare MU, possibly even build around it. In the past, anarchs tended to play Eater in their decks as a way to complement the "instead of accessing" part. But anti-ai ice is more popular now than ever due to Aumakua, and with Account Siphon rotated, Eater decks have fewer tools to be oppressive.

On that topic, let's look at the ways this card is more balanced than Keyhole. The big one is obviously that Stargate can only be used once per turn. No more running R&D 4 times and trashing 4 cards, or shenigans with additonal clicks (such as when Hyperdriver was legal). The runner gets 1 shot per turn. On top of that, the 2 cards that aren't trashed are returned to the top of R&D in the same order. This actually benefits the corp, as they will know which card is coming up after due to the absence of a shuffle. This gives them more knowledge on whether it is worth to rez ice or not.

This lack of shuffling does actually make Stargate stronger in a way. While constant randomizing of cards was very annoying, the corp still had a chance to top deck the one card they needed to get them out of a precarious situation. Stargate makes this more difficult. The runner runs, sees 2 bad cards and 1 amazing, trashes the latter, the rest go back. Now the corp has to draw those cards and make the most of it, cause the runner can just go again on their turn.

Keeping all this in mind, this is definitely a card to fear going forward and I am not a huge fan of it. But I will say, it is a good act of balancing by Nisei, which I respect.

This is a really good card. If you're 1 agenda away from winning, Stargate is usually one of the most reliable ways to find it. If they're having trouble drawing ice (or you've recently used Apocalypse), Stargate is great for keeping them crippled and trashing upcoming counterplay. Stargate also bypasses traps/upgrades that fire on access (e.g. Snare! / Prisec / Ganked) and provides useful intelligence about upcoming corp options. Lastly, in CTM matchups, Stargate allows you to trash key cards without incurring a CTM tag.

2 MU and $4 are a big commitment, but this is so much more efficient than running for individual accesses that it'll see a lot of use. In-faction, Keiko pairs really well for cheap MU along with weird animal tagalongs that make running every turn more economically sustainable.

Unlike its ancestor Keyhole, it doesn't shuffle the deck and can only be used once per turn.