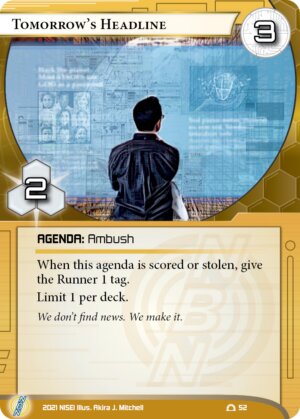 When this agenda is scored or stolen, give the Runner 1 tag.

We don't find news. We make it.
Illustrated by NtscapeNavigator
Decklists with this card

CAVEATS: I am a new player brought in from System Gateway, playing the Starter Format, and only deck building with cards from Gateway + System Update. I've also been jamming and having the most fun with NBN: Reality Plus.

PROS: - It's a 3/2 Agenda with an ability. In Startup, that honor is restricted to the One Of Agendas released per Corporation. In NBN we also have Project Beale, but that ability is that we can treat it as a 5/3 Agenda if we have the time, which I don't count. - It is an Ambush! Glad to see the runner getting punished for taking your agenda.
- It is a way of getting a runner a tag on your turn. There's not too many ways to do this in Startup - Public Trail and Orbital Superiority are the only other ways. This is really useful if you're running tag punishment and want to make sure it connects. It also can be nice if you're running NBN: Reality Plus - and want to get more triggers.

CONS:
-It can be a little bit tricky to use the tag you're generating offensively. Putting one counter on it early and then advancing twice, scoring, and using your last to trash a resource or play a Retribution isn't too difficult, but you're unlikely to get to live the Orbital Superiority dream. Seamless Launch exists and is only two influence so it's not impossible, unless you're under no pressure and can afford to advance several agendas.
- It's a one of. It's a good sign when a problem with a card is that I can't have more of it. Though because of this, your opponent isn't going to be playing around it in an NBN deck, which is also great if you want to pop in some other ambushes....

Overall, this is a great card. I think every NBN card in Startup should run this, unless you're doing something extremely specific, or just don't want to put good cards in your deck.