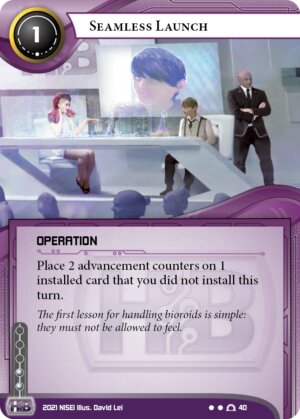 Place 2 advancement counters on 1 installed card that you did not install this turn.

The first lesson for handling bioroids is simple: they must not be allowed to feel.
Illustrated by David Lei
Decklists with this card

I'll just say it: My moderately-experienced opinion believes that this is the strongest corp card in System Gateway, and I don't care about you randos championing Spinny. It does something that very operations do. It's a design space that is equally exciting as it is dangerous, with how quickly Nisei had to hit the PD rush deck that was terrorizing standard. I think we all knew that this card was strong going into release day, but we still underestimated it.

Extra "clicks" are difficult to come by for the corp, and difficult to find cheaply. When they are cheap, it's expensive or interactive. Shipment from Tennin is an amazingly strong card that now finds itself in Nisei jail, and it could be turned off by the runner for most of the game. Jeeves has good numbers as well, but must be preinstalled, has a strict requirement to fire, and can be trashed.

Enter Seamless Launch. Ignoring combos, Seamless Launch is basically the cheapest way to get extra "clicks" ever. As an operation, it cannot be trashed without some kind of tool. Seamless Launch itself cannot be turned off. The way to take away the card's power is to run whatever it's intended for, immediately. This is surprisingly difficult, because any card installed in a remote can be a target.

Basically, the weakness of the card is that it cannot fast advance, so it requires you to build a remote. However, you want to do this anyway. It enables ease of scoring 4, even 5 advancement agendas, and it does so economically positively! You get two advancement tokens for the price of one, and worst case, the extra click you get off Seamless can be used to play an econ operation if you decide to score a 3 advancement agenda.

This card is one of a kind in standard, and naturally in startup as well. With a single card, you get extra clicks while going economically positive. The only card I can think of that can do the same thing is Fast Break, and it goes credit neutral a lot of the time, while being unplayable for a lot of the game.

Without requiring another card to survive in a remote, and allowing you to score basically any agenda you want at low opportunity and credit cost, it does something many runners are just not equipped to handle. This is not to say that the card should be played as universally as Spinny. Some scoring plans just don't need or want it. But if you can make it work, Spinny and Seamless should absolutely make influence 1-9.

The Corp installs a card face down in a server! What could it be? We have four main options:

"Traditional" shell game decks rely on their ambushes (category 1) to protect everything else, meaning that they're typically light on ICE (due to all the deck space you need for the ambushes). This isn't an inherently horrible strategy, but it also hasn't seen all that much success recently; a typical 45-card Runner deck can often deal with it without tech cards simply by playing cautiously and accessing only a random subset of cards (in the hope that some of the Cerebral Overwriters get stranded).

There's another way to do shell games, though: if you're playing a more traditional style of deck (maybe not full-on glacier, but at least using servers that are expensive to get into repeatedly), you don't really need an ambush to play shell game. There are plenty of cards in categories 3 and 4 that will drain the Runner's resources trying to reach them, either because they have to (categories 3) or because they think they might have to (category 4, masquerading as 2 or 3). Build yourself a moderately taxing server or two, keep installing things in it/them, and eventually you'll build up a large economic advantage and be able to win the game more or less however you want.

This sort of "taxing shell game" deck is generally better than the traditional variety because it can save a lot of deck slots. That NGO Front might be useless to the Runner, for example, but it isn't useless to the Corp; even if you IAA it and they don't run, you basically spent 2, for 8, which is not a horrible rate of return, and so you can fit it into one of your economy slots rather than having to remove ICE for it. The same goes for many of the other cards in that sort of deck; they're serving a useful function of their own, and just happen to be usable for shell games as well.

As such, the usual Runner-side counterplay for this sort of deck is to exploit a structural weakness: the shell game doesn't really work if the Corp has to leave their agendas advanced overnight and thus reveal them as advanceable cards (really cutting down the number of options for what they could be). This gives the ambush-less shell game decks their more usual name: "never advance". And if you're never leaving a card advanced during the Runner's turn, you're normally stuck with just 3 clicks for scoring it; that means 3/2s, or when you run out of those, 3/1s. Winning with only those is really inefficient; you're spending both more clicks and more credits to score out than you would be scoring 5/3s, and that gives the Runner time to build up a lot of multiaccess and hammer R&D, or a rig that's efficient enough to negate your ICE and make running your useless assets cheap enough that it isn't a tempo hit any more, or do whatever else their rig is meant to do.

So hey, what would happen if there was a card that completely negated the main drawbacks of these decks? The problems with never-advance decks basically boil down to "we don't have enough 3-advancement agendas without resorting to those with major downsides, like 'being only worth 1 point' or 'being Merger', and even the good ones like Project Atlas don't do anything if scored as a 3/2 and are a bit of an economic hit". The effects that help keep your economy going don't go on the 3/2 agendas; they go on the 4/2 agendas. There's a lot more redundancy there, too; my review of Corporate Sales Team lists a lot of options, and you can fill out most of your agenda point requirement with economic 4/2s nowadays (if you're going all in, 3 each of Corporate Sales Team + Cyberdex Sandbox + Offworld Office is 18 agenda points on its own). So being able to consistently never-advance 4/2s as though they were 3/2s can launch the runners' attitudes towards never-advance decks away from "the opponent is doing weird stuff, let's just play normal Netrunner and blow up R&D" and more towards "this deck can't be beaten without adapting to its strategy, I need specific tech cards to beat it".

If I'd written the review up to this point at this time last year, everyone would have assumed I was talking about Jeeves Model Bioroids. Jeeves is a better card than Seamless Launch in most respects; he/it's reusable, and gives you benefit in all sorts of ways beyond never-advancing agendas. Jeeves has proven his/its worth time and time again (a simple way to see this is that it's a 3-of in both the 1st and 2nd place decks in last years' Worlds). (Incidentally, another card that fits the description is La Costa Grid, which is often playable in the same decks as Seamless Launch but seems to be a little worse in practice; however, the decks often play both. La Costa Grid also has other uses, although most of them combos, rather than Jeeves' general-purpose benefits.)

How does Seamless Launch compare to Jeeves? It's only better in 5 specific circumstances:

This means that Seamless Launch is only really playable in two sorts of decks: very fast decks that run incredibly tight on time or economy, and one-remote glaciers that have reasons not to want to create any runnable servers or that are unable to effectively bluff anything in a second remote. Pretty much anything else would be better off running Jeeves instead. That said, the sorts of decks that do prefer Seamless Launch are really good, and ended up being one of the main factors in Violet Level Clearance getting banned again. (One of the primary decks that inspired the ban was a super-fast rush deck based around Seamless Launch and Precision Design, with Precision Design allowing you to use the same Seamless multiple times, and Seamless Launch allowing it to run an agenda economy, together with way too much card draw to keep the economy going and fuel defensive upgrades like Anoetic Void. It's almost certainly still good, and may need further bans to bring it down to a beatable power level.)

The result is a card that's quite hard to evaluate. Seamless Launch is basically only usable for never-advancing agendas and/or assets/upgrades; you can't use it to fast advance agendas because it can't be used on cards installed that turn (and using it on ICE, or the Runner's cards, seems kind-of pointless). You can't win the game with it without some sort of recursion, because each copy of Seamless Launch can naturally only never-advance one agenda. Your deck has to have some reason to want to never-advance 4/2s (or 4-advancement assets) in particular. Its only real advantages over Jeeves Model Bioroids are "not being an asset" and "not being unique", with everything that that entails. But, when you do have a deck where it fits perfectly – when you're running an agenda economy but need to never-advance your agendas, and can't spare anywhere to put assets, and have some way to cope with not drawing it or having spent it already – it makes the deck much, much stronger. As such, I expect to see it in only a minority of deck archetypes over the next few years. However, it may well make those archetypes may strong enough that they end up being played a lot relative to other decks, with Seamless Launch ending up all over the place anyway.

This card looks a lot like Shipment from Tennin, but 1 cheaper, 1 influence cheaper and the play requirement is in the Corp's control rather than the runner's. All of these things combine to make a card that's extremely strong- often acting as a Biotic Labor that costs 3 less.

As of this being written, this card is a lynchpin in both Asa Group: Security Through Vigilance and Haas-Bioroid: Precision Design "never advance" decks that seek to (generally) win extremely fast. These decks play ice that is taxing on rez, like Gatekeeper and copious card draw in the form of Violet Level Clearance and Sprint. By sculpting their hands quickly, they can find the right balance of ice, agendas, and operations to score 5-6 points before the runner can effectively contest.

I expect this card to be played a lot over the next few months.

I agree this card seems really strong. However the fact that you can't fast-advance with this is definitely a significant difference between this and Shipment from Tennin and Biotic. But it does have the strength of throwing off all sorts of runner math. The ability to never advance a 5/3 to suddenly win with two of these is startling.

VLC is now banned. Did it die for Seamless's and Fully Op's sins? Stay tuned.

"often acting as a Biotic Labor that costs 3 less." If you count the advance cost, it's 5 less.