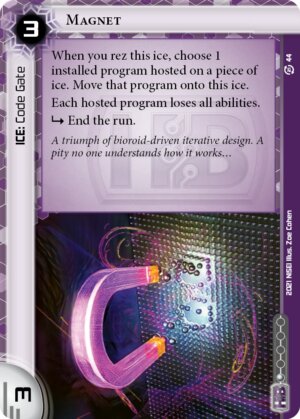 When you rez this ice, choose 1 installed program hosted on a piece of ice. Move that program onto this ice.

Each hosted program loses all abilities.

A triumph of bioroid-driven iterative design. A pity no one understands how it works...
Illustrated by Zoe Cohen
Decklists with this card

This ICE joins the cast of only two other ICE that is immune to Parasite; Architect and Lotus Field being the two others. This alone makes the ICE intriguing. But you can also potentially use it to save another piece of ICE from a Parasite, though I believe in practice this will not often happen. Still, I find myself inexorably drawn to this piece of ICE, he he he.

The problem with using this to get rid of a Parasite is twofold. First there has to be a Parasite sitting on a piece of ICE collecting tokens. This happens of course, but often the runner immediately trashes the ICE. He does this if the ICE has 0 strength (or 1 if they have a Grimoire), he runs at the ice with his Data Sucker tokens at the ready, or by having a loaded Hivemind. The second issue, is that you have to rez Magnet while the Parasite is sitting on the other piece of ICE. A runner used to the threat of Magnet may just try and avoid running at unrezzed ICE while his Parasite is active.

These are the two main problems I see. The second can be played around and to some extent the first one too. Having a Cyberdex Virus Suite ready may keep the Parasite on the board long enough to get Magnet rezzed. And there are ways to rez the Magnet without the runner actually having to run at it. Amazon Industrial Zone and Executive Boot Camp being two examples. A NEXT ICE build with Magnets and the Boot Camp may be able to nab those Parasites pretty consistently.

The great thing is that if you do manage to snag a Parasite, it is probably out of the game, no recursion for the runner. And it'll still be eating up a MU. The only way to get it back would be to trash Magnet another way; Spooned or Apocalypse. (EDIT: Obviously the runner could trash it when they install another program. I was thinking the card type was part of the text box, but no, it is still a program. Aesop and Endless Hunger too. My b on that point.) This ICE will also work versus Caissas. They aren't used that often, but you run into Knight on occasion. Caissas will be much easier to grab with Magnet because they don't kill their host and so stay on the board. Plus any future programs that are hosted on ICE (I think a Shaper program like this would be a cool card: 1 MU - Cost 1 – Install Morph only on a rezzed piece of ICE. Hosted ICE gains the subtype of your choice.)

I do believe this will be played often. Parasite is still one of the best runner cards in the game and just the fact that Magnet is immune to it is a big asset. Even if you don't happen to be facing any Parasites, this is still a hard end the run with decent strength. Yog.0 eats through it for free though.

(Fear the Masses era)
quailman2101 274
The runner can also trash Parasite -- Aesops, new program installation, Markus... — Goldstep 18 Jun 2016
An interesting thing with this one is its strength to cost ratio. From Quandary, Lotus Field and Enigma, a straight end the run code gate usually has a cost equal to strength+1. Magnet breaks this rules and that alone is to consider if your meta sees more Gordian Blade and Zu13 than Yog.0. — Lupus Yonderboi 18 Jun 2016
Thanks Goldstep. I guess wishful thinking got the best of me on that point. — quailman2101 18 Jun 2016

"Morph" is out now, indeed as a shaper program: Egret

Magnet is versatile and very effective. Spending $3 for an end-the-run ice that usually costs $3 to break is very reasonable. And it comes with a useful ability! 25% of players are using Botulus (as of October 2021), plus occasional Chisels and Tranquilizers.