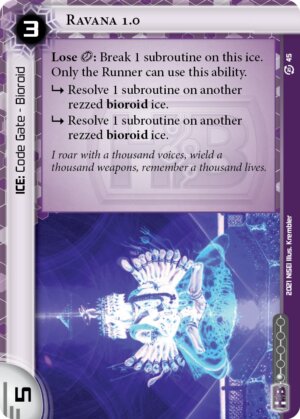 I roar with a thousand voices, wield a thousand weapons, remember a thousand lives.
Illustrated by Krembler
Decklists with this card

Assuming you've already got a bunch of bioroid ice in your deck, the only downside to this card is that it doesn't do anything on it's own. This is really only a problem early game. You can think of this similarly to positional ice, except it's temporal ice - other ice needs to be rezzed first.

It's 2 stronger than Viktor 1.0 for the same price. If you are one of the few people still using that card, swap them for this now.

(23 Seconds era)
CascadeHush 60
Actually, from my experience it's not Viktor 1.0 you want to swap with this, but Viktor 2.0. The fact that Ravana is weak early game means that *you need early game ice to go together with it*, or it's useless. And Viktor 1.0 actually offers one of the best combos with Ravana, giving you the choice of either firing two brain damage routines or one brain and one end routine. Of course, all this discussion may be moot, as the two Fairchildren seem to me to become the de-facto code gate choices for any Bioroid ice suite in the future. — The Real C 31 Jul 2016
Fairchild 1.0 looks to be in the same vane as Pup and Popup window, basically causing a 2 credit swing in the corps favour for the most part. I could see that combing with Ravana at the right time though, if you can see the runner has no credits and forcing them to trash something. Not bad for the price. I'll think about the combo with Ravana and Victor 1.0. It might be worth putting 1 or 2 back in my deck. — CascadeHush 31 Jul 2016
This card has made me revisit Stronger Together. The stats are nuts! It stinks if you get 2 or 3 of these before any other bioroid, but hopefully that won't happen often. But you have so many choices once you are up and running. Brain damage, trash a program, end the run, even give a tag if you got sherlock 2.0 rezzed. I'm pretty sure sherlock 2.0 is the only ice that has a sub that straight up gives a tag. — quailman2101 31 Jul 2016
2

One neat trick with Ravana is in combination with Haas-Bioroid: Architects of Tomorrow: often, you can opt to (or are forced to) make the subroutines on Ravana non-ETRs, which forces the opponent to pass it if they encounter it on a rez in front of a server. If, for example, your only rezzed bioroid is Ansel 1.0, your opponent must break/click through the Ravana to avoid copying Ansel 1.0's bad subs, and then they still pass it, giving an opportunity to trigger Architects. Early game, rezzing a Ravana and using the Architects trigger to immediately rez an Eli/Bran/Ansel elsewhere can provide pseudo-burst economy. That 4 is the same as a Hedge Fund! Admittedly, it a) has to go towards ICE, b) depends on letting the runner through at least one ICE, and c) prevents any benefit of them face-checking that other ICE -- but those are workable. Most bioroids in startup outside of Tyr aren't especially punishing if the runner has a click or two to spare for bad subs.

Any Haas-Bioroid: Architects of Tomorrow deck in startup is probably running all the bioroids available anyway, but among those, Ravana is the backbone of the deck. Plus, if you aren't clicking through, it's expensive as heck to break. At best, Buzzsaw breaks for a credit and two Leech counters. A Ravana on an otherwise-empty central server shuts down any Leech farming unless the runner has a playset of the things on the field. Great Archives protection, especially, against a Criminal looking for easy targets.

At first glance, this has similar numbers to Engram Flush or Slot Machine, which are some of the best code gates ever printed. So why isn't this ice seeing serious play?