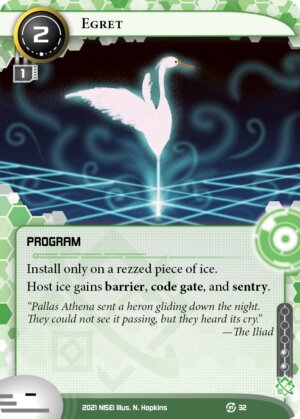 Install only on a rezzed piece of ice.

"Pallas Athena sent a heron gliding down the night. They could not see it passing, but they heard its cry."
—The Iliad
Illustrated by N. Hopkins
Decklists with this card

Criminals get Tranquilizer, Anarchs get Botulus, and Shapers appear to get Egret to finish the pattern of 2 cost programs you host on ice. As the earlier reviewer noted, the MU cost can make programs such as Egret tricky to account for, but now we have tools like DZMZ Optimizer or Supercorridor to help with memory.

Rielle "Kit" Peddler: Transhuman gets good use of Egret as it provides her a way to deal with carefully positioned Barriers or Sentries. In combination with other options like Pelangi or Engolo (depending on what format you are playing) Egret lets Kit get through some of the modest glaciers that tend to develop in the mid to late game.

Also interesting with Tāo Salonga: Telepresence Magician, as you can move the ice Egret is hosted on to a more useful position with his ID ability. The Corp can just trash and replace the ice you host this on same as the Tranq or Botulus of course, so try and put this on something the Corp will miss. If they trash it anyway, use Simulchip to have your Egret perch on something else.

On a lore note, the first printing did not include any flavor text, making the connection between the abstract idea of an egret and changing an ice's type a bit confusing. An ancient Egyptian creation myth has a heron (egrets are herons) making a cry at the beginning of the world. In ancient Greece, as the flavor text in the new printing points out, the heron was a messenger of Athena and was interpreted as a sign of her favor. Aztlan ("the place of whiteness/herons/egrets") is the mythical homeland of the Aztecs, although whether it was a paradise or a tyrannical kingdom is unclear. In Asia the heron is a symbol of beauty and in Chinese the word for egret is similar to the word for path or way.

Clearly then the Egret is meant to be a kind of creative blessing, something that perhaps inspires the runner to think outside the box in regards to a certain ice.

A permanent Tinkering at the expense of 1 MU and 2. The MU cost is the real problem, in terms of credits Egret will pay for itself if you can break ice more cheaply using a different breakers.

Looking at this card all I can really think of is Study Guide. Slap a few Egrets on non-code-gate ice in front of R&D and charge up the study guide. You then have very cheap access to R&D. Also works well in combination with Kit's ability as that lets you avoid slapping an Egret on the outermost piece of ice if you only need to make one run per turn.

Egret is very much a shaper solution: instead of making better keys let's change the lock. In a way it's a shaper's Parasite. Not destructive but still effective.

(Terminal Directive Cards era)
Silv 329
It is not an alternative to Tinkering, for the same reason why Paintbrush is not - it can only be used on a rezzed piece of ice. — Gargulec 30 Apr 2017
True, but it can also be installed in the middle of a run via smc and clone chip. — Myriad 1 May 2017
This is going to get wild when Inversificator comes out: Send every outermost ice to the back of the server, Egret the non code gates, and Scavenge your birds around when you need to hit other servers. — daytodave 2 May 2017
Skip the birds and just run Surfer. — Myriad 4 May 2017