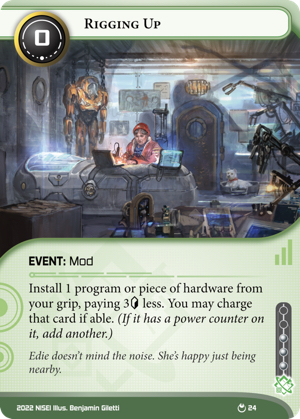 Install 1 program or piece of hardware from your grip, paying 3credit less. You may charge that card if able. (If it has a power counter on it, add another.)

Edie doesn't mind the noise. She's happy just being nearby.
Illustrated by Benjamin Giletti
Decklists with this card

Oh look, it's an upgraded version of Modded!

Except, Modded wasn't seeing a huge amount of play (presumably why they upgraded it), and the upgrade is ... questionable? To be a good target for Rigging Up, you need something that costs 3 or more, and that can make use of power counters, and starts with a power counter. (Because "charge" only works with things that already have counters on them.) That list is surprisingly small.

The list of hardware is even shorter. Mind's Eye would work, but again, it doesn't actually start with counters. Which basically just leaves the boat, which is probably one of the main intended use-cases. Clocking in at an eye-watering 8, and with some of the most valuable power counters I've ever seen, I feel like Rigging Up is basically intended for getting the boat on the board and getting her ready to roll.

Which is great, but... Endurance is a console. Once you it's out, what are you going to use the rest of your Rigging Ups on?

I may be proven wrong on this, but at the moment, I feel like it's hard to justify this, even in a boat deck. There just aren't enough programs or hardware that I want to Rigging Up!

Edit Thanks to Toper for pointing out that the Rigging Up list is even smaller than I thought!

It's even fewer targets than that: charge only works if the card has a power counter already, which in your list is just boat and Atman.

Another one was just released though: Hyperbaric, a Study Guide upgrade.

Oh dang, you are exactly right - I keep forgetting that Charge only works for things that already have some tokens. I will update the comment. Thanks for the catch!