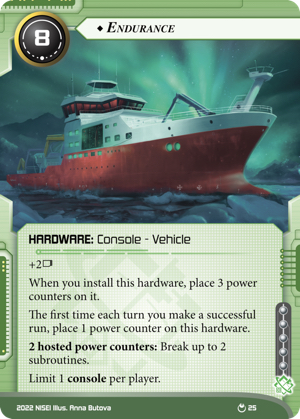 When you install this hardware, place 3 power counters on it.

The first time each turn you make a successful run, place 1 power counter on this hardware.

Illustrated by Anna Butova
Decklists with this card

So the boat is extremely powerful, to say the least. It's worth discussing what the boat is, and is not.

The boat is arguably the strongest early game card in standard right now for Runners. That's right, early game. There is a common misconception that high-cost=late game, when the reality is that Netrunner's economy doesn't work like Magic's or Hearthstone's. If you want to SMC out a Unity when coming across a gearcheck like Enigma, you're paying 2+3 just for the install. Pay another 3 to break Enigma's subroutines, and you have now paid 8, the same cost as installing the boat and breaking through the ice for free.

But there's some important things to take into account: First of all, the boat can break essentially any gearcheck. If you've installed Unity, you can't break Ice Wall. You certainly can't facecheck carelessly in a world with Stavka. On the other hand, the boat will solve any ice that the corp will use to stop you in the early game. A second point to take into account is that the boat only gains more value over time as a sort of run economy card. Unity will force you to pay up for any gearcheck, no matter how small. The boat will continue to snowball by breaking ice for free.

What ends up happening is that the boat player will slam down the boat in the early game, and for the cheap, cheap price of 8 credits, they can run over all ice the corp installs. No need to keep drawing into Boomerang, no need to dig for more breakers, or even charging Aumakua. You have a boat, so you can get in. Nuts.

That said, as easy as it is to deem the boat overpowered (which it totally damn is), it isn't truly the be-all-end-all of ice solutions, because there are viable corp responses. Amani Senai can heavily punish careless boat installs, although in practice a good Runner will be cautious about installing the boat against NBN asset decks for this reason. Envelopment's ridiculous number of subs are a massive pain for the boat. Anansi and Fairchild 3.0 are obviously annoying for the boat for similar reasons.

It's also worth discussing what does not beat the boat. Public Trail+Retribution is a bait combo and you shouldn't try it. If you're in standard, Drago Ivanov with Retribution is simply too weak to be playable. Cheap gearchecks also don't work. In theory, spamming cheap ice can eat boat counters, but in practice, boat decks absolutely slaughter these types of rush decks because again, you can't gearcheck the boat. It breaks anything, and it's only a matter of time before the Runner manages to lock the remote. Hard-Hitting News also doesn't work, or at least not more than it usually does. The Runner saves money the turn the boat is installed by breaking ice for free, not to mention the fact that boat shapers are in a faction with Misdirection.

The boat has given all of the early game power shaper has wanted, and much more. Most rush decks are either on fast advance or a cheesy kill combo, because the boat+Pinhole Threading slaughters the jammy rush style that we're used to. Whatever corp deck you build, you have to answer the question, "How do I not just immediately f***ing concede on turn 2 when a boat gets dropped down." For many corp archetypes, the answer will be "you hope the runner throws the game." Now, this isn't necessarily a bad thing, it's just how metas turn out. However, it can't be overstated how impactful the boat is right now.

Thank you for speaking the truth, I have been playing a bunch of corp (weyland) in startup and this card seems unstoppable in that format

I really like this card. I love how it's big and ridiculous and expensive, but powerful enough that it might actually be worth the cost. I love the idea that a "console" is just whatever electronics rig you have for interfacing the net, and that it doesn't have to be small or practical, or not a boat. I love the theme, that Captain Padma is just as much a hacker as, say, Noise, but that she does it by directly messing with undersea cables instead of net-surfing to music in loud clubs. I even love the dumb pun intrinsic in the card. (It's an icebreaker ship! Get it? Get it??) All in all, this is exactly the kind of card that I am predisposed to like.

So how does it actually stack up in the game?

Well, to start off, this is probably the craziest console since Security Nexus. And I think this one is probably the better of the two, to be honest. Auto-breaking two subroutines (and ignoring strength) is really powerful. It will get you past most ice, so it's almost as good as security nexus's effect. But with the added benefits that:

Of course, breaking two subs is not QUITE as good as completely bypassing the ice, and you still have to contend with on-encounter effects like Tollbooth etc. But even so, very few pieces of ice have more than two must-break subs. Even if you take some net-damage along the way or whatever, you'll most likely get in. (And if you break all the subs, you can make use of effects like Hippo!)

Also similar to Security Nexus, this card is clearly at its best with some supporting cards, and probably with a specific ID. This is obviously Captain Padma's boat, and her ability works well with it - if you focus on R&D, then between the console's ability and her own, you can get two tokens from a single run. Which means that, unless they install and res two pieces of ice on R&D, you can probably get in once per turn, every turn, even if you haven't installed any breakers yet. And of course things like Daeg, First Net-Cat, or Into the Depths can help give it charges beyond that.

Naturally, if you drop Padma on the table though, they're going to ICE up R&D, since that's your obvious target. (Also because, you know, you're playing shaper...) But even without her ability, the console can recharge itself just through successful runs, which can be anywhere. Go checking archives because Jinteki is threatening Regenesis? Power token. Checking a naked remote? Power token. Surprise running on HQ because their hand is getting fat? It may surprise you to learn - Power token. Because you can (and should!) still build a regular rig. What the boat gives you is an incredible backup plan, if some scary (or expensive) ice shows up unexpectedly.

So let's talk synergies. In general terms, there are two main classes of cards that Endurance really benefits from:

Stuff that gives you power counters: The boat runs on power counters, so any way you can boost the number of boat counters you get is good.

Stuff that gives you extra benefit from running: Since you need to make runs to charge up the boat, you might as well get extra stuff in the process! Some highlights:

Also, special bonus shoutout to Jak Sinclair who gives you a free run every turn. And the downside (can't use icebreakers) is mitigated greatly when you have a boat that can break ice for you.

I think this card is going to be strong enough to have some very fun decks built around it. I don't know if the meta is going to be slow enough to allow decks that need time to drop an 8 console, but if it is, this is going to be a powerhouse. And even if not, I predict some serious fun jank as people try to make it work. But really, that effect is strong enough that I'll be surprised if it doesn't have at least some presence.

In evaluating Boat, it's important to know the value of one counter. How much effective credit value do you get for a successful run, or for charging Boat, and when should you use Boat instead of a breaker, given the choice?

Long story short, a Boat counter ranges in value from 1c to about 2.5c -- most often, it's worth in the range of 1.5 to 2. This value depends in part on what breakers you use alongside Boat. Let's look at a couple examples:

(These numbers indicate why Padma is a weaker shaper ID)

In light of these numbers, I think it's helpful to compare Boat to the crim consoles that give credits for running: Paragon and Pennyshaver. Both are considered solid, strong options for criminals. Let's take the more conservative estimate and say a Boat counter is worth 1.5c. In that case, Boat may cost 8c to install, but the tempo hit to your breaking power is more like 3.5c, which is comparable to Paragon and Pennyshaver. It will slow you down a bit to install, but if you turn those Boat counters around on runs in the next turn or two (likely) the tempo hit is far less than the 8c price tag would suggest. As far as rebates, Boat returns more than Paragon (but without filtered draw), and more than Pennyshaver if you run only once per turn (or even twice, if you want to somehow factor the click cost of clearing Pennyshaver). Boat has other benefits: it's a perfect AI that doesn't get hit by any of the AI-tech out there, and it provides 2 MU, compared to the 1 of Pennyshaver and Paragon.

Boat pairs well with flexible breakers that let it fall back on credits when necessary, but that might have less efficient breaking matchups that Boat counters can shore up.

The understandable failure to test in cardpool of this card is so egregious that it made me put in worlds deck. I was fairly intrigued looking at some of the dies to pinhole cards in Borealis: Part 1 set, as they often seemed to grok the ways in which the original game was fun to win. This boat, on the other hand, abuses a disruptive technique that ANR made prohibitively expensive with good reason, breaking ICE. It's almost difficult to describe the magnitude of how game breaking this buoyant vessel is, because designing it requires a fundamental lack of knowledge of how the world exists as it is rather than how we wish it to be. This attacks multiple pieces of ICE, often times in multiple servers, at the control of the runner, and is triggered often if you run. The amount of time and resources it will take the Corp to mitigate the damage done by this ability text is substantial cognitive load. I'm in genuine awe that any amount of play-testing would allow this hilarious implied pun. At best, this card is an abberation of design philosophy that somehow made Shaper fun to play. At worst it is a warning against taking one's self too seriously.

I keep trying to read just the bold text to make a funny poem but I don't think that's happening.