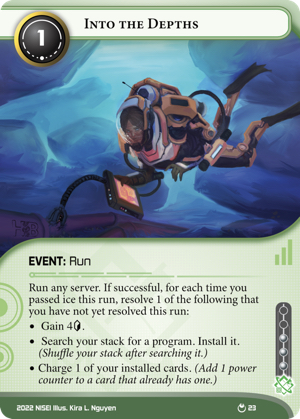 Into the Depths 1[credit]

Run any server. If successful, for each time you passed ice this run, resolve 1 of the following that you have not yet resolved this run:

- Search your stack for a program. Install it. (Shuffle your stack after searching it.)

- Charge 1 of your installed cards. (Add 1 power counter to a card that already has one.)

Well this card is cute! It's a good old-fashioned "run and get stuff" event, except in typical shaper fashion, it's all complicated and weird. That said though, I absolutely love the theming on this card, and how it actively rewards you for digging in to the deepest, most protected recesses of the corp's board.

First off, it only really works if the corp has ice. Which, to be fair, most corps do these days. But still worth keeping in mind. (Although important to remember that it doesn't say rezzed ice! So if the corp is too poor to bring it online, you can get some freebies. Pity that at 3 influence, it's not likely to be imported into criminal decks...)

Second - you're probably not going to get to use all three effects very often. Even ignoring the fact that you need a server with 3 ice, only one of the effects (gain 4) is useful at all points in the game. Charge is only useful once you have something with power counters, and by late-game, you probably don't have any programs that you want to search for and install.

It's interesting to compare it with Dirty Laundry. They both are run events that net you 3. Dirty Laundry is a bit more flexible, since you can target un-iced servers with it. But Into the Depths has some interesting features - It's also 1 cheaper than Dirty Laundry to start. And it can potentially give you a lot of value beyond just the 3, depending on how deep the server you ran was.

It's also an interesting parallel to Bravado. They are both 3-influence run events that scale based on the amount of ice passed, and do things that their factions are known for. (i. e. "get money" and "weird nonsense") Into the Depths is a bit less focused than Bravado, but it's also more flexible - You can use it for different things based on where you are in the game and what you need at that moment.

I'm not sure how valuable a power counter is in general yet, but boat counters are obviously super-important, and this card is obviously designed to be used alongside Endurance. Endurance also has the nice synergy here, since it's a reliable way to break through ice even if you don't have your breakers out yet. So you can sail right on past some ice, and then use the search/install effect on Into the Depths to go find the appropriate breaker for next time!

It's worth pointing out that the search/install effect is really strong in terms of tempo, as long as you have a program you want to install. Even if you trigger no other effects (i. e. you ran a 1-iced server) you get a run, a card search, a card draw and an install, (three clicks worth of value, plus whatever the search is worth) for the price of a 1 event. Not bad at all!

Anyway. A weird shaper card. But a flexible one, with a fantastic theme, and obvious synergies with one of the most interesting cards of the set.

All aboard the boat!