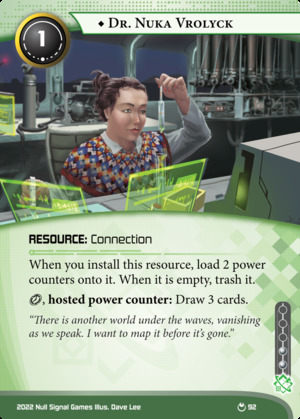 When you install this resource, load 2 power counters onto it. When it is empty, trash it.

"There is another world under the waves, vanishing as we speak. I want to map it before itʼs gone."
Illustrated by Dave Lee
Decklists with this card

So let's compare some numbers.

Diesel costs you to draw, to play, and nets you 3 cards. That's one more than you'd get if you just clicked normally.

Dr. Nuka Vrolyck costs you to draw, and 1 to play, and to use, and draws you 6 cards. So that's two more than you'd get if you clicked to draw normally, but at the cost of 1.

So if you can't charge her up, she's juuuust slightly more efficient than Diesel. She nets you one extra card, that you pay 1 for. On the other hand, this improvement comes at the cost of having to commit to spending 4 clicks on card draw, instead of Diesel's 2. In practice, Diesel's instant payout and ease of use is almost always going to be better.

Unless, of course, you can give the doctor more power counters. Because once she's going, she's basically just a Diesel dispenser, except that you don't have to actually draw the Diesels. So they're basically double efficiency. So the more times you can actually activate her ability, the better she is. If you get to use her 4 times, (instead of the default 2) then you've spent 6 clicks, but drawn 12 cards, which is great. If you get to use her 6 times, then you've spent 8 clicks to draw 18 cards, which is even better. And so on.

For Captain Padma Isbister decks, the main competition for this space is Earthrise Hotel, which also converts power tokens into card draws, at roughly the same rate. (2:1, once you take into account the click required to activate Dr. Nuka)

Earthrise Hotel is actually probably more efficient over time - not having to spend clicks to trigger the card draw is really nice! - but Dr. Nuka has two important things in her favor: First, the upfront install cost is significantly cheaper: 1 vs 4 is a major difference. (Nothing worse than spending all your money installing Earthrise, and being unable to play the cards that you draw with it!) But also, the fact that you can control the rate that Dr. Nuka dispenses cards is a big help as well.

I've had a lot of games with Captain Padma where Earthrise Hotel made me overdraw on turns where I needed to spend all of my clicks on running. And lots of games where Earthrise Hotel blew itself up because it ran itself out of tokens before I could refresh it. Dr. Nuka is really nice this way, because you can always just wait to click her until you're ready.

So anyway, bottom line: I like Dr. Nuka Vrolyck a lot. I've been testing her in my power counter boat deck, and I think she's a viable replacement for Earthrise Hotel. I don't think she's a strict upgrade to Earthrise, but she's definitely an interesting sidegrade. It will probably come down to personal preference and playstyle for most people, but even the fact that we have multiple options is pretty cool in my book.

Great review. I completely agree. Note that this can pair well with Flux Capacitor.