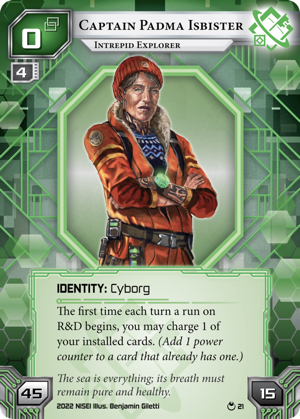 The first time each turn a run on R&D begins, you may charge 1 of your installed cards. (Add 1 power counter to a card that already has one.)

The sea is everything; its breath must remain pure and healthy.
Illustrated by Benjamin Giletti
Decklists with this card

My first thought when reading her ability was, "Wow, that seems fun". And my second thought was, "That's way too powerful". But on examining the list of cards that use power counters, I realized that there is nothing game breaking (with the possible exception of her console). But my first thought holds true, there are some fun and interesting ideas to try.

First things first: her ability can trigger only once per turn and runs almost never occur on the Corps turn, so you'll only be generating a set amount of power counters. Interestingly, her ability occurs at the start of an R&D run, not on success. Spending a click to simply run into an Ice Wall may be worth it occasionally, but the real value comes from getting a power counter while doing something you need to do anyway. Successfully running and accessing R&D and/or putting on a brave face for instance. One important note about power counters: unlike virus counters, the Corp has no way to influence them, at least not yet.

Back to the list. Some of the cards are anti-synergetic, power counters are bad for these cards. But usually more is better. In my mind only about half the cards there are worth considering. I'll highlight a few of them below. (I may add more once more cards are revealed from Midnight Sun). You'll probably want to pick only one to focus her ability on.

Chatterjee University - I tried using this card years ago, but it just took too long to charge. And it's unfortunate that it can only target programs. While still janky, I think the extra power counters from the Captain could make this worth trying again. You'll need to get it out really early though which probably means it'd be a 3x.

District 99 - Any kind of recursion is welcome. You get your favorite tools back and it can save you from running out of cards vs Jinteki. However, this card has always been super clunky outside of MaxX and the influence is prohibitive. You could try it with the Captain but you'd need to include other ways of charging it up too.

Earthrise Hotel - This is one of the strongest options in the current pool. It's already a good card especially with support. But if you are running R&D anyway, you can keep this charged indefinitely, netting you a free two cards every turn!

Endurance - She's called Captain for a reason and this is it. Her console is a friggin' boat! And it's a super strong console at that. The install cost is high (though new Rigging Up helps a lot), but it's power rivals that of Sunny's Security Nexus (a console I despise). Once it's installed, you can face-check any ICE confident you probably will be fine. It's like a rechargeable Boomerang that you only have to install once and can be used on any ICE. I'm confident I won't like this console either when playing as the Corp.

Kasi String - Who doesn't want free game winning points? Charge this up in as little as two turns.

Mind's Eye - This is the interaction I'm most excited about. While probably not as good as her own console mentioned above, it's ability is not to be ignored and it's install cost is much lower. In Captain decks, for every three successful R&D runs on separate turns, you get two free R&D accesses! These accesses can be augmented by cards such as eXer or Nyashia or both.

Nyashia - Mentioned above, this card couples nicely with Mind's Eye. You're only going to be able to keep one of them charged with any efficiency. I'd tend to charge Mind's Eye and keep this as a three-time use R&D Interface. But you could try focusing on this.

The Turning Wheel - This is already a good card, helping you get those multi-accesses on both R&D and HQ. Getting it charged faster is always welcome.

Temple of the Liberated Mind - Once installed and used once, you could keep this charged with Padma's ability, getting one extra click each turn. This is definitely a better option than Upya.

Some lesser choices (in my mind) include Revolver, Takobi and Puffer. I think Captain Endurance is going to be a force to be reckoned with going forward. I actually hope they add a counter. Something akin to Macrophage, which counters viruses while not being worthless without them in play. Or maybe an agenda that clears power counters on scoring.

Some of the cards that you've mentioned will be rotated out after Midnight Sun release, e.g. Chatterjee, Turning Wheel, Temple of the Liberated Mind.

Okay, thank you. I was worried about that. I'm back to the game after years away, and don't really know how the rotation is going to work. I'll edit it after the 22nd probably.