I am overjoyed with how people have taken to Stealth Jesminder. If you are not familiar, the concept of the deck is:

There are some really great ways to spend your influence, and after Hot Pursuit and DJ Fenris you only have 8 to spend! You can see some other really sensible, good options in some of these other lists:

I have been a bit of a late adopter to including Hostage in these lists because I am so greedy for influence, and I really appreciate scumhooligan, Katyana, and hemraa publishing their lists, convincing me to try it out.

Also, importantly, on the day of the tournament, one of my opponents, DrApathy, gave me an alt art Hostage he made picturing a snowman being held hostage with a blowdrier. The snowman looks like a snowpenguin, which, given the art for Hot Pursuit, felt like kismet. 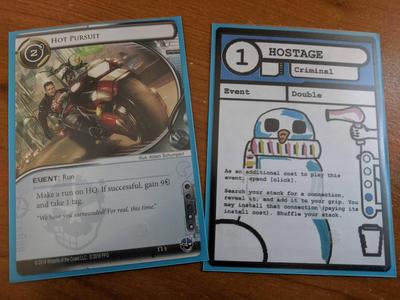 Anyway, I think the main innovation of this deck with paying influence for Switchblade over Dagger. The synergy with Pelangi is amazing, Switchblade guarantees cheap Hot Pursuit runs in a way Dagger cannot, and also serves as a counter to certain weird ice like Tour Guide.

I went 3-2 on the day, losing to High Profile Acme and Sportsmetal Rush, and beat Outfit, Outfit, and RP Political Dealings.