1credit: +5 strength. Use this ability only by spending a credit from a stealth card.

"…and once the shadow rises, the curtain shall fall." -revenant
Shaper • Adam S. Doyle • Creation and Control 42
All sets:
Links: Decklists | ANCUR 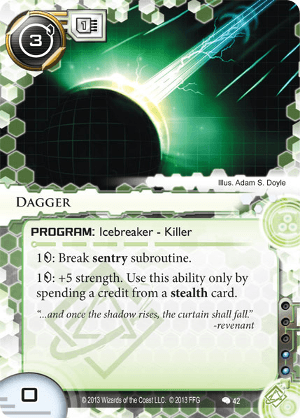 As far a Killers go this has to be one of the best in the game, sadly however theirs no really amazing killer as they all come with a down side from Garrotes price tag to Ninjas poor Str and dagger is no exception. It requires stealth credits to gain that huge Str increase and has no Str to start so will need it just about all the time, This means adding Silencer, Cloak or Ghost Runner to the deck.

Still its one of the most efficient Killers requiring only a few creds and a stealth to break only Switchblade or Femme Fatale are more efficient and they both have their down sides in comparison to Dagger.

It's worth noting that it can be helped out other ways too, you can use Datasucker's, Dinosaurus, The Personal Touch or the new Net-Ready Eyes to help reduce the stealth requirement of Dagger. It's also worth noting that because of this Killer and alot of things are in Shaper to help it, it makes it so Shapers can have a full efficient rig without spending any influence. Using this one of their many decoders and Snowball / Cerberus "Lady" H1 makes for an effective rig. All in all a great Killer that takes some setup to get working but very good once it is.

(Chrome City era)
Pinkwarrior 2232
Dagger's great, but at 2 influence, Switchblade might always be the Stealth-oriented Killer of choice in a Shaper's rig. With Test Run and Self-Modifying Code, running a 1-of isn't unreasonable. It costs the same to install and with the requirement of just 1 extra stealth (Which IS its weakness), a single sentry in any server is obsolete. It comes down to whether a runner is willing / able to get that extra Cloak out I suppose. — LynxMegaCorp 22 Jun 2015
I personally would look at running both, if their sentry heavy you gonna have problems with switchblade and dagger would be the one to get fetch otherwise switchblade would be the better, as you say it's down side is that it takes 2 stealth for 1 sentry. — Pinkwarrior 22 Jun 2015
Can the credit for breaking subroutines still come from a Stealth card? — Kutpurse 2 Apr 2019
Yes — BlackCherries 2 Apr 2019