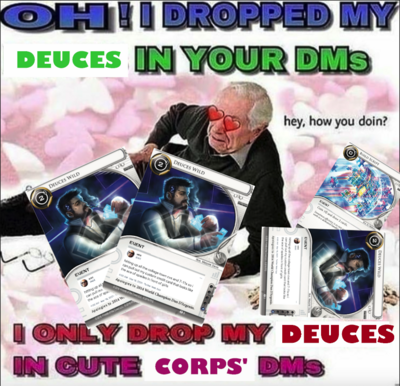 Before we meme, I'd like to inject some sincerity: playing Netrunner in person has reminded me how much I love this game. It was incredible seeing Netrunner people again. I recommend you do it as soon as it's legally and medically viable for you to do so. An extremely non-exhaustive list of people I was overjoyed to see for the first time in 18+ months: @ctz, @kysra, @sanjay, @osclate, @bahram, @DanB, @internet, @Ysengrin, @rongydoge, @analyzechris, @groenkaaf, @shiuuga, @Redino987, and @SimonMoon who managed to stop by and chill without having to play any games of 419 (almost certainly the correct move).

Going into this SC, I was fully planning on playing Apocaloup, but I was losing way too many games with it (like, even more games than you'd expect given my skill level). I was also toying with the most recent in a series of less defensible and more unhinged MaxX lists, but let's not even talk about the win rate with that. So I thought to myself: What would I do if I were a better player?

The answer was to play an incredibly boring 419 list, which you now see before you. The deck mostly speaks for itself, aside from maybe a few choices:

Overall, I think this deck is very solid at the moment, though it probably needs to be tuned to beat the new Sports degeneracy. The biggest risk you face is falling asleep while filling out your decklist.

This deck went 3-1 in swiss, beating PD twice and Sports once, losing to NEH. In the cut, I faced the eventual winning Sports list and lost. Congrats to @rongydoge on taking the win home for the Boston meta!