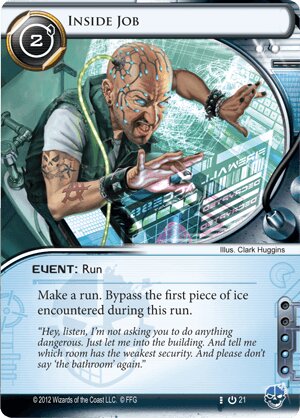 Run any server. The first time this run you encounter a piece of ice, bypass it.

"Hey, listen, I'm not asking you to do anything dangerous. Just let me into the building. And tell me which room has the weakest security. And please don't say 'the bathroom' again."
Illustrated by Clark Huggins
Decklists with this card

This card embodies being slick. It's a cool clean casual skip over a piece of ice to get something the Corp thought you'd at least struggle with. Doesn't matter what it is. It can be the biggest, baddest, most credit shlorping piece of ice there is. You'll get by it all the same for 2.

It's suave, Core Set Criminal emboided, so it's a shame that whenever I look at this card all that comes to mind is a crazy guy going 'HEHHHH!' while those in the stalls next to him just try to take a dump in peace.

That aside, it's good. You know it's good. You knew it was good before you even read the rulebook. It's simple, cheap, effective and one of your best tools as a Core Set criminal to do what they do best - be a cheeky bastard who walks up to a problem and promptly chooses to ignore it. It's consistently one of cards that will make your opponent go, 'Gah! I forgot you had that!' and whimper as you nab the agenda they thought was safe behind a Tollbooth.

As for playing against this card, there's only one real way to deal with it, but that's ok because it's all you need - whenever possible, put down a token Ice Wall, Viktor, or something similarly cheap out ahead of your heavy-lifters, forcing their smug rich faces to deal with your defenses head-on. Just be aware that while this removes a lot of Inside Job's bite, cards aren't used alone, and you can bet that there's probably a sneaky Femme Fatale or Forged Activation Orders waiting to make all your plans seem pointless in fresh, tear-inducing ways.

Public Service Announcement: When playing Leela, almost whenever Inside Job is played, it is worthwhile rezzing the outermost piece of ice.

I've been playing her for months and people seem to keep missing this: it's the one thing which I keep hoping Corps miss. And they do! It's the "trash their assets" of beating Leela. That is all.

What is there to say about this card, really? Let's you bypass a piece of ICE either for early game server access, or for late game surprise runs where the corp has done the maths on your programs and think they're safe to advance an agenda. 2 can be a lot cheaper than that outermost piece of ICE after all.

The down sides to this card are that it forces the run by the card's effect, meaning it can't combo with things like The Maker's Eye, but that's a small price to pay for potential and surprise access, and Corp ICE like Data Raven and Matrix Analyzer still proc as the encounter effect is on the card, not the subroutine.

Out of faction, it's a little less attractive at 3 influence and unfortunately doesn't splash with Rielle "Kit" Peddler: Transhuman decks as the ICE is still technically "encountered" meaning the very ICE you're bypassing gets the code gate.

(Order and Chaos era)
Fentonizer 325
No. Data Raven, tollbooth etc won't proc. “Bypass” When an effect allows the Runner to “bypass” a piece of ice, he immediately passes that ice and continues the run. Any subroutines on the ice bypassed are not broken. Bypassing prevents any unresolved conditional abilities that met their trigger condition when the ice was encountered from resolving. — Wolfknight 19 Mar 2015
Fair enough. I always read it as the ICE is still technically being encountered, so those effects resolve, then you just move past it immediately. Thank you for the clarification. — Fentonizer 20 Mar 2015
so additionally, femme also skips the tollbooth, data raven, etc stuff — Clutchpedal 14 Jun 2015
also Peddler does not trigger as all other ices posted above — J0112358 12 Dec 2015
No, Kit's ability does fire; this is because Kit (and Inside Job) are Constant abilities, not Triggered Abilities, meaning they resolve immediately. — Quarg 16 Feb 2016
1

This card embody the opportunistic and efficient aspect of criminals. For a , you bypass the first ice. Early, it mean that no asset or agenda is protected if it is behing a single ice.

If the corp has two ice, it must rez both of them for the runner to facecheck the second one. That is a lot of credits for a single ice to break on a single run. In this aspect, it compete with Tread Lightly for economic warfare (in a certain way). But really, it allow the runner to make a subtancial economy, especially if the biggest ice is on the outside.

At 3 influences, it is much better to splash Boomerang out of faction.

Like all event, this card will combo well with Prepaid VoicePAD and Mystic Maemi. It is near unbeatable for efficient running. If you are a criminal and you want to remote lock the corp (the state in which you can run any remote at any time to steal an agenda), then this is the best card for that purpose.

It is a versatile card and can help you tremedously to put to good use those token from The Turning Wheel.

The art is great, as is the quote. I'm kind of sad that this is now the only way to see Gabriel Santiago (a rotated identity). It has been in the meta since the beginning, maybe because it represent criminals so well. Good card.