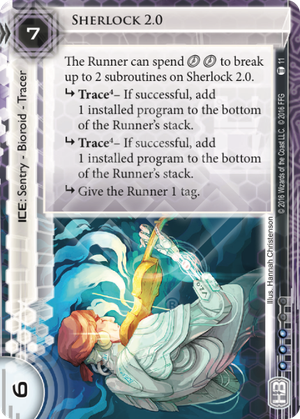 At first glance this card looks a tad like Ichi 1.0 - a sentry with two decent subs and a pointless one; however even in HB, with no in-faction tag punishment[^1], "take a tag" is more taxing than Ichi's trace for a tag+brain - at least an extra credit, even if they have New Angeles City Hall installed, or an extra click (with Networking) or more likely both.

Being a 2.0 doesn't actually add as much to sherlock as it has some bioroids, since you either need to break both or neither of the traces, it does stop you breaking one with a click and one with some other means, but that's about it.

On rnd it's a must break for medium or keyhole decks, and not cheap to break, the question is whether you would slot this over Assassin (also 7 cost). I suspect most player's reaction to this will be a solid no - citing assassin's ability to kill and inability to be clicked through as being much better than the extra subroutine and point of strength. However, It is worth considering that in a bioroid heavy deck, ichi 2.0, vikram 1.0 and ravana 1.0 are all str 5s, so being a 6 does reduce the risk of having half your ice nullified by Atman