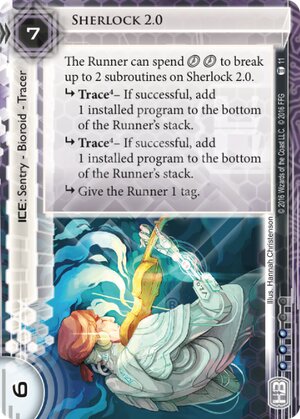 subroutine Trace[4]. If successful, add 1 installed program to the bottom of the Runner's stack.

subroutine Trace[4]. If successful, add 1 installed program to the bottom of the Runner's stack.

subroutine Give the Runner 1 tag.

Illustrated by Hannah Christenson
Decklists with this card

Firstly, as a 2.0 bioroid, Sherlock 2.0 follows the patterns of +1 strength, +1 rez cost, and a boost to his subroutines, and 2-click to break 2 subs. In this case, the upgrade to the subroutines is the most significant improvement.

The 1.0 model’s 2 subroutines are traces to add an installed program to the top of the runner’s stack, in convenient, but very easily recovered from. The 2.0 model offers 2 trace subroutines to put an installed program onto the bottom of the runner’s stack, which is much more difficult to recover from. Shapers may not seem to be greatly affected by this, but bear in mind their decks are built to tutor exactly as much as they need to get their rig set up once, tutoring an extra program will set them back. Anarchs are typically planning on drawing their breakers or injecting them to pull them back from the heap, either way forcing them to find a breaker again is a decent setback for them. Criminals are hurt pretty badly by either program trashes or having a breaker buried (either one may as well be the moon for all the recursion they have), luckily they have Faerie in faction to save them from such unfortunate face-checks. For an added 3rd sub we tack on an unconditional tag, just for fun.

The tag subroutine isn’t particularly threatening on a 3-influence HB ICE, since it won’t be splashed into a tag-punishing NBN deck, or a Weyland kill deck, but most runners do rely on resources (Beth Kilrain-Chang, Temüjin Contract,and Wyldside all come to mind), so most often the tag will be removed.

So, how will runners break Sherlock 2.0? The answer is surprisingly painfully. The most efficient break is to have high link (ideally 4+, but even 2 or 3 is pretty good) and just clear the tag afterwards. The corp can always boost the traces so the runner does have to consider the credit differential, but if the corp is unwilling to boost the trace, then high-link is the cheapest solution. My second-place solution is a tie between D4v1d, and Atman 6, both are costing about 1c per subroutine, and an install targeted at breaking a single piece of ICE. Atman 4 + 2 Datasucker (or Mimic +3 DS) tokens is a tolerable answer (since 4tman has many other uses), but will require extra clicks to farm datasucker tokens, and leave the runner vulnerable to a CVS purge on approach. Any boostable killer will cost the runner a lot of credits, often equaling the corps rez cost each time the runner breaks Sherlock 2.0. The rez to break ratio on this sentry is really good, but honestly most runners don’t rely on boosting reusable breakers to deal with large sentries; as always, the goliaths of the battlefield are best dealt with by avoiding them, or undermining their weaknesses.

Finally, I want to address the card art. I’ve always found the Sherlock 1.0 artwork to be fairly tame; a depiction of a Saturday-morning-cartoon Sherlock Holms puffing thoughtfully on a pipe, undoubtedly a mere breath away from prosaically saying ‘elementary my dear Watson’ while explaining the resolution of a 20-minute mystery. The artwork is fine, though what I think it does best is represent a meatspace mechanical man interacting in a digital space. Sherlock 2.0 looks more like the darker side of a coked-up violinist that we see in Conan Doyle’s later depictions of Sherlock Holms. Calm, capable, and when he delivers his masterstroke he unravels his rival’s plans in the most unexpected (and at time convoluted) of ways.

(Blood Money era)
bubbathegoat 596
Great review! And I really agree about the art, it creates a much stronger sense of how dangerous his skills are to the runner, almost like 1.0 was an act. — Tirranek 14 Sep 2016
2

At first glance this card looks a tad like Ichi 1.0 - a sentry with two decent subs and a pointless one; however even in HB, with no in-faction tag punishment[^1], "take a tag" is more taxing than Ichi's trace for a tag+brain - at least an extra credit, even if they have New Angeles City Hall installed, or an extra click (with Networking) or more likely both.

Being a 2.0 doesn't actually add as much to sherlock as it has some bioroids, since you either need to break both or neither of the traces, it does stop you breaking one with a click and one with some other means, but that's about it.

On rnd it's a must break for medium or keyhole decks, and not cheap to break, the question is whether you would slot this over Assassin (also 7 cost). I suspect most player's reaction to this will be a solid no - citing assassin's ability to kill and inability to be clicked through as being much better than the extra subroutine and point of strength. However, It is worth considering that in a bioroid heavy deck, ichi 2.0, vikram 1.0 and ravana 1.0 are all str 5s, so being a 6 does reduce the risk of having half your ice nullified by Atman

Really bad against a runner with Citadel Sanctuary and some Link (e.g. Sunny Lebeau: Security Specialist, or any runner on Security Nexus). Also requires hard ETR subs deeper in the remote if it's going to protect your scoring server. Still, the raw numbers are fairly impressive: 6 strength, 3 subs on a sentry that rezzes for 7. Bukhgalter breaks for 6/8, MKUltra for an unbearable 12 (or 9 and a tag/click, or more likely, it doesn't break and pays through the traces and gives a click for the last sub). Engolo costs 7. It does make an excellent outer ice for HQ or R&D, both resistant to turning wheel and expensive to pass multiple times. Even so, probably not worth playing outside of Haas-Bioroid: Architects of Tomorrow, and even then not at 3x. The subs just don't bite enough.