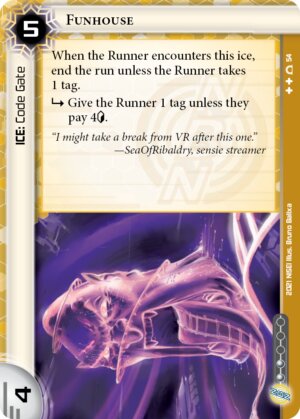 When the Runner encounters this ice, end the run unless the Runner takes 1 tag.

subroutine Give the Runner 1 tag unless they pay 4credit.

"I might take a break from VR after this one."
—SeaOfRibaldry, sensie streamer
Illustrated by Bruno Balixa
Decklists with this card

Funhouse is some jank.

Let me give some context for myself - I am a new player brought in from System Gateway, playing the Starter Format, and only deck building with cards from Gateway + System Update. I've also been jamming and having the most fun with NBN: Reality Plus. However, I wanted to put out some thoughts on this card since I figured few other people would.

-It's a 4 Strength Code Gate, so we're above Buzzsaw.
-It has an on encounter trigger, which is really valuable in a format with Botulus, Boomerang, and just wealthy, kitted out runners.
-Runners hate tags, and since you're probably putting this with NBN: Reality Plus, you're getting value back if they hit it.
-Startup doesn't have a lot of options for putting multiple tags on things outside of AMAZE Amusements (which requires an Agenda to be stolen), so with Funhouse you have some options for plays involving Psychographics
-Look at that long tongued purple man! What a guy.

CONS:
-Expensive. With a rez cost of 5, you need to be in a pretty comfortable position if you're going to be rezzing Funhouse. Which could be okay if....
-Terrible Facecheck. An unprepared runner hitting this basically always going to end the run right away. Which I guess, I want from my ice? But not for a rez of 5 - I want that to hurt them. So for facecheck -> they chose to end the run with some pain I would much rather use Whitespace, or Enigma or Ping. Since it's so expensive we might as well also compare it to Tollbooth, which is more expensive with a whopping 8 but will at least cost the runner 3 .
-Doesn't actually stop a dedicated runner from getting into your server. Ignoring whether they can break your ice or not, a runner doesn't actually need any tools to get past Funhouse, and they'll just get away with 2 tags. So Funhouse is definitely not going to stop anyone from stealing the game winning agenda. In this way we're comparing unfavorably to something like Karunā, which doesn't necessarily stop the runner, but the runner will need to load up on resources early to get through. For Funhouse, if they're running first click they can recover from their run with some credits and extra clicks (depending on how the got through the subroutine).

So where does this leave Funhouse? Because of the cost and bad facecheck, it's a really bad early game rez. And since it's not keeping anyone out, it's not a super protective ice like the Tollbooth or a Pharos. So we need to use it somewhere in the middle game - and it can be okay here. Since runners aren't going to want to take the tag, this can be a decent defense for early advancing agendas, if you can keep the economy to rez it and advance, especially against some of those aforementioned non icebreakers. . Finally, since it is so porous, it can be a really good bluff ice in front of an ambush - nothing like making your opponent run through a Funhouse to then pick up an Urtica Cipher. Overall, there are probably better ice unless you have a very specific gameplan, or you are trying to tech specifically against Botulus and Boomerang.

Being tagged during a run can be noxious to the Runner. Data Raven had its spot back at the time, and Funhouse is obviously designed to occupy the same one. But without the Trace mechanic.

One of these in front of a Quantum Predictive Model is pretty great.

The numbers on this card are very reasonable. It usually costs 3 to break, and if they take the tag on encounter I'd value the tag at another 3 credits of value. A 5-rez ice that can reliably charge a 6 credit swing to pass is excellent. In NBN: Reality Plus, getting through this ice causes a 8-credit swing, making it one of the most efficient ices in the game.

But like most tag cards, it is very unreliable and can be exploited by strong runner play. The worst thing this ice can do to a runner is inflict their choice of 2 tags, 1 tag + 4 credits, or end the run. $5 for a blank end-the-run is tough to rez early without gutting your tempo. When the runner has 4+ agenda points, if the winning agenda is in reach, 2 tags usually won't stop them. Tags can potentially win the game for you, but many games are lost before the corp can find and use their tag punishment cards. Many other games, you will suffer drawing tag-dependent cards that you can't use. Some tag cards even have MULTIPLE conditions. Psychographics not only needs the runner to have multiple tags, but you also need an applicable agenda and enough money to use it. Exchange of Information requires that you have a small agenda scored and a larger agenda stolen.

Early game, this is an expensive end-the-run. I'd limit it to only the highest-value servers (e.g. protecting a Rashida, a Daily Quest, or a critical central server). It's terribly inefficient for low-value assets like PAD Campaign -- the game will probably be decided by the time the PAD Campaign produces enough value to justify rezzing the Funhouse to protect it. If you're looking for a higher-tempo alternative to Funhouse, I think Authenticator is much easier to throw around early.

Other liabilities: if it's the outer-most ice on HQ/RND it's vulnerable to Turning Wheel. An ice that costs this much shouldn't need a warmup act. Hunting Grounds is not currently popular, but if you see it, it's a bad day for Glumhouse.

Some pros: If the runner chooses to go through and you are ready to punish tags, it's one of the most efficient ices in the game. It works reasonably well against Boomerang/Botulus/etc. And the art is excellent -- he looks like a particularly angry bus driver, or a kung fu villain in the Ming Dynasty. He's versatile, he has range. We like Funhouse.