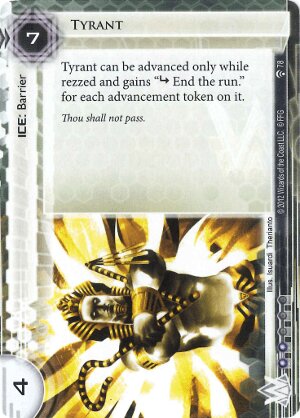 Tyrant can be advanced only while rezzed and gains "subroutine End the run." for each advancement token on it.

Thou shall not pass.
Illustrated by Isuardi Therianto
Decklists with this card

Everything about this card suggests to me that it was printed as an inside joke among the designers at Fantasy Flight; this card is anything but tyrannical. For 7 credits, you’ll receive a generous 0 subroutines. Spending 7 credits on any ice is already a huge tempo hit, but at least the big hitters like Heimdall 1.0 or Tollbooth are taxing enough to be worth their cost. Barring any supporting cards, you’ll have to invest 1 click and a credit (we’re at 9 or more credits now for those keeping track) to be at parity with Bastion; at this point though, you could just stack two Bastions for the same price.

This is just unforgivable inefficiency. At least with Woodcutter (another awkward ‘rez THEN advance’ ice) and Corporate Troubleshooter you could theoretically win the game.

Back to the joke thing. It’s been a long time since I read the Bible, but didn’t the Hebrews escape Egypt?

(The Universe of Tomorrow era)
sayonara 8
I think this card is sort of viable in Tennin Institute deck, but other than that, this really is a toothless piece of ice — zzzthemaskzzz 4 Sep 2015
without saying that morning star breaks it for 1 cred whatever the number of advancement tokens on it. — Absolium 4 Sep 2015
I can't see this ever being good, but Woodcutter might get a new lease on life with PAD Factory. Runner plans for Ice Wall; gets his hand shredded out of Weyland instead. — FarCryFromHuman 4 Sep 2015
It might work better against Lady if you can put 5 counters on it. But at strength 4 it'd probably just get Atmaned. — Lttlefoot 5 Sep 2015
The mechanic is meant to reliably tax the runner more the more you advance it. Anything except Morning Star needs at least one additional credit to break this. You want to rezz him early and advance him once per turn. Sadly he will be parasited by then. — Capstone 10 Sep 2015
Did some silly moves with this and Sub Boost. :D — mega0live 2 Oct 2015
1

People saying this card is an inside joke better wake up. Tyrant can be super powerfull in Tennin. Just played a game where i got a Tyrant with 13 advancement tokens and the server just got unstoppable! Combine it with commercialization and you're in for a treat!

This can have an advancement (or multiple advancements) on it now when played by using Mumbad Construction Co. if you decide to invest at least 9 credits when rezzing. Same for Woodcutter.

(I'd rather do it with Woodcutter).

(23 Seconds era)
tendermovement 49
PAD Factory and Tennin too. — quailman2101 30 Jul 2016
To be clear, PAD factory and Tennin add the counter before Rez because they don't require that the card be advanceable. — Goldstep 31 Jul 2016
Toss in an Anson Rose so that, when it rezzes, it instantly has tokens, or potentially a Chief Slee if there are enough end the runs on it to force them to break as many as possible... — Trevyn 2 Aug 2017