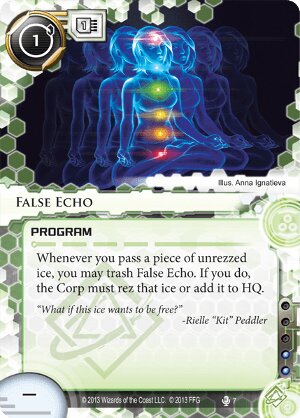 Whenever you pass a piece of unrezzed ice, you may trash False Echo. If you do, the Corp must rez that ice or add it to HQ.

"What if this ice wants to be free?" -Rielle "Kit" Peddler
Illustrated by Anna Ignatieva
Decklists with this card

Opening moves gave us a card that is fundamental to the dynamic of net runner; that has seen play in nearly every game since… Alongside Jackson Howard It also gave us this card: False Echo. A card that has seen ‘trace amounts’ of play since and no particularly strong use case.

I suppose the intention was that this card would cause a corp playing expensive ice to lose a click every now and again- when they couldn’t afford to rez a piece and it moved back to their hand? Or perhaps to reveal a planned flatline surprise early? (Like that Komainu which you were saving for a house of knives score... Mind you Komainu was still a pup back then not to be released into the hunting grounds for some time.)

How often do these situations occur though? Really? Most ice is cheap enough just to rez when threatened by this. Including a card to counter an edge case against some jank deck hardly seems justified. -and the memory units could otherwise be occupied by something useful in situations that actually occur during games of netrunner.

So this didn’t see play.

That was until late 2015 when DDoS was released.

Now there is a fairly amusing combo where DDOS forces the corp to not rez their outermost ice, and then this card sends it back to the hand. If you have multiple of these installed, you can pull down an unrezzed glacier as each subsequent ice becomes the outermost. However the combo isn’t that great, being slow to come out and not especially painful considering the investment time to set up. -and frankly Blackmail Valencia is just easier. Its something though, and on occasion it comes together to win the game.

Still this wins the hipster card of 2015 award. It’s a retro card, its unpopular and its a pretty cool looking if not all that functional combo to pull off. Probably the corp won by the time you managed though…

What I actually like about this whole tale- this card proves how the design space of netrunner allows even terribad cards like this to become useful when the right support is released. Netrunner provides us with a constantly evolving puzzle on how to wring every piece of value out of the components we’ve been given. It’s nice to see this card have its 15 minutes- knowing that even if briefly- it got its time in the sun because of a great game and a great community.

I salute you all- and this card is evidence why I should.

(Business First era)
gamblingworld 74
I think this card is mostly designed to be used with Alpha. — Stroomschok 12 Apr 2016