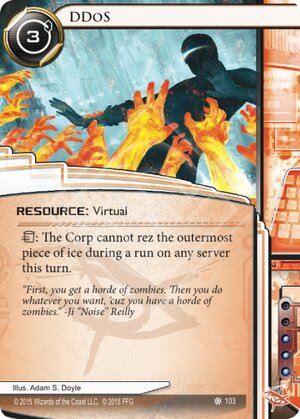 trash: The Corp cannot rez the outermost piece of ice during a run on any server this turn.

DDoS stands for Distributed Denial of Service. For you guys who aren't familiar with the term, it is an actual technique of causing internet disturbance, involving hitting the target server with lots and lots of internet traffic by sending loads of packets to it that it has to respond to, quite possibly with a wide array of computers at the same time, infected earlier with a trojan or Remote Administration Tool client - these would be so-called zombies. The goal is to flood the server in question with a number of requests enough to cause it to either respond slower or completely crash, thus denying further service.

Enough gibberish. The flavor text of this card says everything - you can literally do whatever you want, because you've got a horde of zombies. Tread where they don't want you as many times as it pleases you. It is an Anarch card that actually fits Criminal a lot more. You are going to put the Corp in a situation where he has money that he can't spend on anything! How messed up is that?

Say, a winning agenda is hiding behind an unrezzed glacier. DDoS alone won't let you through, but it is going to make things a lot easier than anticipated. Instead of three ice, there is two you have to pass. And that might just be not enough to stop you.

Another example. You're going to stop the Corp in his tracks by launching an early Account Siphon, but the HQ is behind an unrezzed piece. Install DDoS and all of a sudden there is no problem. What's more, the Corp doesn't even have anything he could spend these credits on, because he's been DDoSed. And now he's also bankrupt, with an useless piece of ice before he manages to catch up.

The combination with False Echo has been described above in great detail. I shall waste no more of your time with it.

You were happily digging with Medium on an unprotected R&D, but then some jackhole has put a scary ICE there. Launch DDoS and keep digging. High chances of getting a quick, clean victory.

Firing Apocalypse with DDoS on board is made so easy that it's almost poetry.

I'd also like to add that I love the art on this card. SUPERHOT comes to mind.

Ready to become an online necromancer?

DDoS now costs additional three pips per piece regardless of faction due to level 3 MWL restriction, which brings it to whopping six influence for non-Anarchs. This seems to make it a lot less reliable. DDoS is still a strong option, yes, but since it's really expensive to slot more than one copy, it best be used as a failsafe, backup or plan B - the additional costs really limit its potential use in combo decks.

Haha, not anymore! Let's get back to making zombies!

(Democracy and Dogma era)
H0tl1ne 408
It kills me that this was printed orange. The theme is totally Anarch, but the mechanics scream blue. Good review! — WayneMcPain 7 Apr 2016
Ah, words of flattery are always welcome. Thanks for your review of my review! :D — H0tl1ne 7 Apr 2016
2

I just saw a beautiful play on Jinteki.net combining False Echo and DDoS : but the question remains, would the combo make it so that multiple False Echos can be used in one single run with DDoS? Would each ICE be counted as the outermost ICE when the previous one was bounced with False Echo during that same run?

It was a beautiful combo with two Hyperdrivers and a Keyhole in conjunction with the previously mentioned combo: the runner had 10 clicks in just one turn to run with Keyhole multiple times for free on an RnD that had no rezzed ICE, hence, False Echo could bounce the ICE in a single run and continue to hammer RnD with Keyhole.

If the DDos & multiple False Echos combo does't work in a single run, it is still great if you have all those Hyperdriver clicks and just bounce one ICE at a time and afterwards hammer RnD with Keyhole.

(The Universe of Tomorrow era)
benticurus 1708
Yes, the combo works. I've been meaning to try it. — whirrun 13 Sep 2015
I'm actually surprised this works, I figured the second effect that says the corp MUST rez ice would take priority over the older one. Wouldn't this mean that Blackmail also works with False Echo? — Bigguyforyou518 15 Sep 2015
It should. "Cannot" effects override others, so the corp would have to add the ice to HQ. — Nacobs 18 Sep 2015
Something about this interaction seems deeply fishy to me. I know it's considered legitimate, but hear me out: DDoS is a trash ability, meaning that its ability is paid for, activated, then the card leaves play. Once the first piece of ice is bounced with False Echo, DDoS is no longer "in play" and therefore its ability can no longer be referenced beyond what occurred during its initial activation. To me, when you trash DDoS, it only knows what the outermost piece of ice is as it's heading to the Trash. If False Echo changes this, DDoS has no knowledge of it because it's not in play. — nutritionalzero 18 Jul 2016
If DDoS was a resource that said "Forfeit an Agenda, outermost piece of ice cannot be rezzed" that would make more sense. DDOS would fire, then False Echo, but because DDoS would still be in olay, its state would be in-play and it could affect board state. To me, when DDoS is trashed, it's placing an invisible token on each outermost ice. It shouldn't have any knowledge of the board state once it's in the Trash. — nutritionalzero 18 Jul 2016
Very late reply, but DDoS just makes a binary statement "is this the outermost piece of ICE?" The ICE that is the outermost is not snap-shotted because it can change, and the ability doesn't target any specific ICE, it just says "all ICE that are the furthest from their server can't be rezzed." There are no invisible tokens, and it has no knowledge of board state. It would need knowledge of the board in order to track when a piece "shouldn't be considered the outermost ICE" anymore. — Swekyde 2 Sep 2016
The way to think of this is DDoS changes the rule of the game for a turn; the change is associated with neither DDoS nor the ICEs. For the rest of turn there is just an extra condition on whether the Corp would be able to rez a piece of ICE. — bbbbbbbbba 2 Jul 2017