When your turn ends, gain 1credit if you made a successful run this turn; otherwise, trash Grifter.

With modern secretaries, incoming data can be filtered, sorted, tagged, and even sold without the intervention of a human user. In fact, given the zettabytes of data that might flood into a rig on a successful run, a human user could be considered useless ornamentation.
Criminal • Ed Mattinian • Mala Tempora 46
All sets:
Links: Decklists | ANCUR 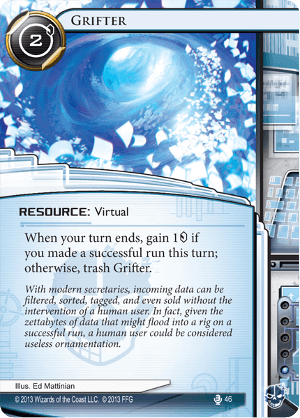 For a long time this card has been pretty poor mainly as it's a poor man's Desperado that if you cannot make a successful run is lost. However I've found use for it as of late with the D&D expansion playing online.

It actually has some positives over Desperado. Firstly it's not unique, Secondly it's cheaper both on Influence and cost and lastly it's virtual so Apex: Invasive Predator can use it and I would recommend it their. It also works well in Adam: Compulsive Hacker since he has Always Be Running. Sadly I can't see it seeing much use anywhere else however as it just doesn't fit other runners decks but expect it to start to see some play in those decks because it's actually fantastic in the right build.

(The Universe of Tomorrow era)
Pinkwarrior 2208
I think the best part about this card is that it's drip econ you can activate the turn that you install it. Sadly that doesn't synergize with Always Be Running on the first turn it's installed, but in all other cases that little catch it quite nice. — FarCryFromHuman 6 Sep 2015
actually it dose synagize with always first turn as you get the credit at the end of your turn if you made a successful run. — Pinkwarrior 6 Sep 2015
Why not use it in addition to desperado rather than instead of? — Lttlefoot 6 Sep 2015
Many times with right build (and against some Corps only, true) Desperado gains you more than 1 cred per turn, that's the difference. But if you can destroy/break cheaply Corp's ice Grifter might be nice add to Desperado. But is it worth slots? It also doesn't give you memory and that's why Desperado is 1 cred more expensive. Desperado wins easily. Too much risk with Grifter and not enough advantages, I think. — toiry 6 Sep 2015
I wouldn't run it in addition to Desperado because the D&D runners all want to run their consoles really as they fit their styles & because of the Influence hit. Desperado can get more than 1 credit a turn this is ture & Grifter only works if you can break ICE on the cheap something that both Adam & Apex can do this is why it works here and doesn't really work for other runners. I feel Sunny could use it also as she can get through easy also, however she has better options like Underworld Contacts so I wouldn't bother their. — Pinkwarrior 7 Sep 2015
The problem is that you have to make a successful run for at least 3 turns to break even. And in the late game where you might have to recover financially for one turn this cards becomes a liability. — Capstone 9 Sep 2015
1

As we are seeing more and more horizontal Decks this might become more interesting. It could work alongside with Security Testing and Desperado along with High-Stakes Job and Dirty Laundry and other interesting run events. This could help with the current IG Meta as well... Haven't tested this yet, but will give it a try. On the other side you have to make this run every turn.