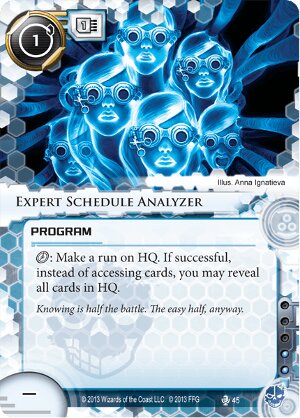 click: Run HQ. If successful, instead of breaching HQ, you may reveal all cards in HQ.

Knowing is half the battle. The easy half, anyway.
Illustrated by Anna Ignatieva
Decklists with this card

(Or, if you're against RP packing ELP, ESA lets you get a one-click HQ run, then Inside Job lets you negate the ELP effect.)

I mean (as of All That Remains) this card is in the same spot as Data Dealer was before Shi.Kyū hit in Honour & Profit: a card that has an effect you could conceivably want, but nowhere near worthwhile.

Sometimes, seeing the entire contents of HQ is entirely useful: This would synergise nicely with the super-combo of Nerve Agent+Sneakdoor Beta+clicks remaining, as you gain Nerve Agent counters...

But, really, it's spending a credit, a card, an install and 1 MU to let you spend runs on HQ into seeing it all.

The effect is nice, but nowhere near worth the cost. And I can't see that changing.

It's definitely not the greatest card in most instances, but it's awesome against punishing PE decks. When a Legwork could wreck yourself against Snare! or Fetal AI, it's good to be able to see what's in hand. Can you run relatively safely? Will you get flatlined?

It's obviously a lot more difficult to justify when you would have to pay more than 2 credits to get through the ice. But when you know you might take it on the chin, why not take a peak?

(All That Remains era)
Archdukej 10