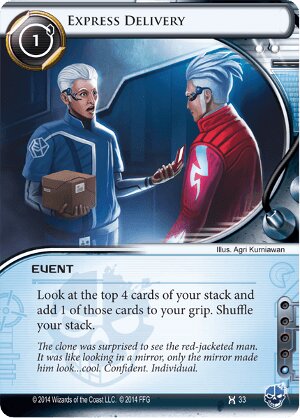 Look at the top 4 cards of your stack and add 1 of those cards to your grip. Shuffle your stack.

The clone was surprised to see the red-jacketed man. It was like looking in a mirror, only the mirror made him look…cool. Confident. Individual.
Illustrated by Agri Karuniawan
Decklists with this card

Express Delivery is an oft overlooked mini-tutor. Frequently disregarded in favor of cheaper, and sometimes more beneficial cards like Diesel. But, what it lacks in scope to full-fledged tutors like Self-modifying Code, it makes up for in flexibility. Consider its advantages compared to most other "true" tutors or simple draws like I've Had Worse:

That last one is key. Too often you can get a card too early (Monolith?), forcing you to keep it in your grip until you can play it or you lose it before it becomes relevant by taking damage. Or, are you still spending to draw to try and find what you need? This can compress four s spent drawing down to just one, and let you delay things you don't need right away.

Additionally, its low influence is a bigger deal than one might think. The value of a tutor card decreases proportionately with the size of one's stack. As such, you typically want several copies of your tutors to increase the odds you get one early. So, for Anarchs who want to look for cards that aren't viruses, or Shapers who need more than just programs, this fills the role well without bankrupting your influence budget.

That said, this is not without its flaws, though many of them are shared by other tutors. The few that are unique to ED are:

The second point here isn't as bad as it sounds. At least you got to put 3 of the next 4 cards you didn't want right now back in your stack somewhere else, right?

(The Universe of Tomorrow era)
Pikeman 279
It's also one of the only non-paid ability speed tutors that hides what it tutors from the corp. — FarCryFromHuman 4 Sep 2015
Good catch, I missed that. Probably mostly a result of it allowing you to pick any type of card. And, while keeping info private from the corp isn't usually an important as the corp keeping it from the runner, it's still a definite bonus. — Pikeman 5 Sep 2015
I really don't know about this card even for Criminal. — punz 6 Feb 2016
I really don't know about this card even for Criminal. A click to draw, a click to play + 1 credit. Ok, a credit isn't worth a click in Crimial but it's 2+ clicks to chose one card. Alternatively, you could have clicked for a card three times — punz 6 Feb 2016
"frustrating when you draw 2+ cards you very much want" You need to put this out of your mind as is irrelevant; it's the same as any tutor. That other card doesn't exist in this timeline (yet). It is a future that never happened because you made other choices.. — CascadeHush 1 Apr 2016