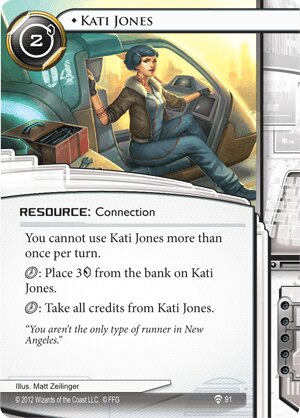 You cannot use Kati Jones more than once per turn.

click: Place 3credit from the bank on Kati Jones.

"You aren't the only type of runner in New Angeles."
Illustrated by Matt Zeilinger
Decklists with this card

I love you Kati

Kati Jones is probably one of the most overrated cards in Netrunner.

Now hold on--"overrated" doesn't mean "bad". But I think people put Kati in decks where she doesn't always belong, or overestimate her value. I'm here to set the record straight.

Consider this. The value of an economy card is the number of credits it gives you above simply clicking for credits. A Sure Gamble lets you spend to get 4, which is 3 credits more than you would have earned on the basic click for credit action. So that means that the act of drawing a Sure Gamble has an effective value of 3.

Let's apply the same principle to Armitage Codebusting. It takes 7 clicks to install and clear off the Armitage, and doing so gives you a net return of 11 credits. That's 4 credits more than the 7 you could have earned by clicking for credits, meaning that Armitage Codebusting has a total value of 4 credits.

Now what if, instead of Armitage, you had Kati Jones? Installing Kati, clicking her up to 15 credits, and then taking them also takes a total of 7. That gives you a net return of 13 credits, for a total value of 6 credits. And then she's still around afterwards to keep giving you more. Pretty good, right?

Maybe, but there are limitations. For one thing, Kati Jones is unique. Drawing a second Armitage Codebusting means you get that +4 credit economy boost all over again. Drawing a second or third Kati Jones means you've mostly wasted your time, unless you can feed her to Faust or soak up damage from Stimhack or something.

For another, the timing of when you actually get money is different. With Armitage, you break even after installing and clicking it twice: you've spent 3 and gained 3. You can easily do this in one turn, making the tempo hit effectively zero. With Kati, though, the fastest you can break even would be install, click to 3, click to 6, and take, which means you aren't actually making money until 3 or 4 turns after installing.

Two runners who I think can really make Kati work are Leela Patel and Iain Stirling. Their runner IDs each have a built-in deterrent for the corp scoring, forcing the corp to play slower and set up more carefully, which in turn lets the runner build up to an explosive late game. But Shapers who want to build to an inevitable late game can probably get more value out of Magnum Opus, and most Anarchs and other Criminals are strongest with the kind of early aggression that Kati makes difficult.

(Data and Destiny era)
tiedyedvortex 4728
This was a much-needed review, thank you. I think the broad appeal for Kati comes from the fact that she's essentially the only influence-free PERMANENT economy upgrade that doesn't require other moving parts (i.e. Underworld Contact or Data Folding). Thrown in as a one-of to supplement an otherwise very burst-heavy econ suite, I think she's usually worth the deck slot. — Bigguyforyou518 3 Nov 2015
I think you make some valid points, but I would like to add two things: — Klopstock 14 Mar 2016
Whoops, sent it two early. Ok, the first point is that I think Bigguy is right, it's quite a nice addition in fast Criminals that rely on the Desperado + Security Testing for money, just as a backup should the Corp ice all their servers so much that you can't get in. Then it is really nice to have the Kati so you don't rely on Clicks for Credits as your sole source of income. — Klopstock 14 Mar 2016
Also the comparison to Armitage seems off to me. Sure, you can only have one Kati in play. But what good is it, to have two Codebustings on the table? You can only click one of them. Sure, you can use the second one after the first one. But you can do that with Kati too. But she is even better, because you don't have to pay for her again. — Klopstock 14 Mar 2016
So does only once per turn mean I can't use either or ability on her? — Kutpurse 18 Apr 2017
Not that it's relevant anymore, but yes, just one of them per turn - either add money or take money — NoxArt 23 Apr 2017
13

Kati Jones provides a huge payoff for delaying gratification. She is ideal in a deck where your runs have some ability to fund or refund themselves, using cards like Lockpick, Desperado, and Dirty Laundry. The worst thing you can do is take credits from her every other turn, trying to recover from zero. Don't be afraid to click for credits the normal way while she charges up. When you finally take off her for X turns you get:

You'll notice two things. First, if you charge her for two turns (taking credits on the third) she is equal to Magnum Opus. This should be your baseline when deciding whether it's worth it to take the credits you need the old fashion way or off Kati. Second, after the sixth turn you get rapidly diminishing returns. Holding off until turn 8 won't help you that much more than turn 9.

Kati Jones is probably the best economy card the runner has for long term credits.

1 click for 3 coins is insane. However, there are drawbacks.

Tagme decks shouldn't even consider this.

With the new Snatch and Grab, this is really dangerous to leave too much money on. For decks that need all their clicks (Medium megaturns) it takes a click to get your money.