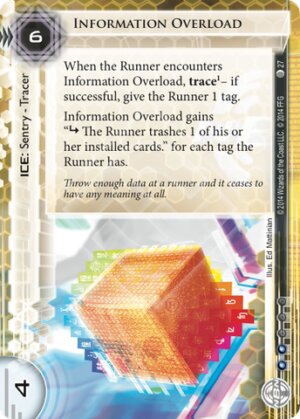 When the Runner encounters Information Overload, trace [1]– if the trace is successful, give the Runner 1 tag.

Information Overload gains "subroutine The Runner trashes 1 of his or her installed cards." for each tag the Runner has.

Throw enough data at a runner and it ceases to have any meaning at all.
Illustrated by Ed Mattinian
Decklists with this card

This is a Johnny card. It, on it's own, is bad. One encounter, it will tax the runner 1 credit unless you boost and then they have to trash 1 card if they both take the tag and can't break it. This will never help you while behind which is something you typically want in most cases.

It's real strength is being turned on when most of your other ice is turned off.

In any NBN tagging deck that aims to win by forcing the runner to eventually get tagged beyond being practical to clear, the runner is going to be making runs against centrals to try to steal the points they need there. And if you kept your centrals scary with tagging ice like gutenberg and data raven, they do nothing. If the runner has a medium, they will dig through your R&D fast and resistor is typically the only ICE that can slow them down.

Information overload can blow up their rig once and leave them with single access as the cost of everything you have installed. And if you're on kill, they've lost their meat protection that they were relying on. I've blown out several people in the cut store championships who were abusing my R&D while I was working to assemble my win conditions. It's best as a trap on R&D (because that's where most people have their best multi access like medium and RDI)

It's often described as a win more card, which I can't disagree with; most times you're already close to a win if the runner has 6+ tags. You've probably have the runner one the back foot, and in a neck and neck game, you might draw information overload when you still need to tag them so it's a dead card in your hand. I can't recommend the card if you want to make as brutally efficient as possible.

But if you want jank, I can say it's always gotten laughs when the runner hit it with 10+ tags and no way to break it (and yes, even my opponents laugh when it hits them). It's a funny trap.

Although trashing multiple programmes could well be devastating, actually pulling it off with Information Overload on its own is difficult. Firstly, you need the runner to be floating tags - multiple tags, ideally, since the Runner gets to decide what gets trashed - so before you rez, you'll need to have drawn the runner over tagging ice like Draven, Gutenberg, or Bandwidth. Giving a tag with Information Overload itself will be very expensive, what with the 6 rez cost and a base trace strength of only one. Finally, a 4-strength sentry dies so hard to Net-Ready Mimic it's not even funny.

The only way I can see to make Information Overload useful is with a big nasty Midseasons. (Or I suppose with multiple City Surveillances firing over a couple of turns, a la NEARPADs). Get the runner floating 7, 8, 9 tags and all of a sudden IO is very scary indeed.

(Chrome City era)
TheseGlyphs 258
assuming you ever get one of these to hit it'll be devastating (and as a tip, corporate troubleshooter is an excellent way to make it hit), but even if you can't, getting one rezzed against a heavily tagged runner is an amazing tax. Even net-ready mimic or 4tman will struggle to plow through this repeatedly with 6+ tags. — CommissarFeesh 29 Jun 2015
The on-encounter ability can be taxing if you have any sort of trace-boosting stuff on the table. Many players are relying on resource-based economies right now, and they do not want to be tagged. This card has its place, but only in decks built to do a lot of tagging and/or capitalize on targets once the tagging occurs. — KitsuAeryn 6 Jul 2015
Had this fire off at a tournament playing a Butchershop NEH. Runner stole an agenda and I mideseasons him with 14 tags and enough money to still spare. Managed rez this and cleared his whole board (including a few Plastcretes he had installed) and then scorched him. Requires some work to make it work, but when it works it does wonders. Still can die to Switchblade easily if the runner is playing a Stealth build with it. — Tanakoskyler22 24 Jul 2015
Unfortunately the on-encounter ability loses out to Data Raven. You've really got to be tagstorm to make this ICE worth it, I think. — LordRandomness 27 Jan 2016