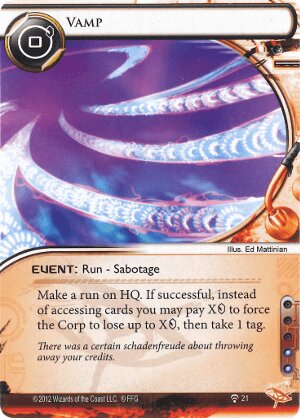 Make a run on HQ. If successful, instead of accessing cards you may pay Xcredit to force the Corp to lose up to Xcredit, then take 1 tag.

There was a certain schadenfreude about throwing away your credits.
Illustrated by Ed Mattinian
Decklists with this card

This card is MVP of my deck! I'm a great fan of Chaos Theory and Snitch-Au Revoir and this card has won me most of the games by bringing corp down to 0 before they even get to rez any ICE, aside HQ.

Many opponents in OCTGN tilt and leave the table after 1-2 Vamps and even curse me about it. Other's just concede the game. Any rich runner should include this card in his deck if he has spare influence, it works wonders against most corporations that are not asset-dependent. If they ARE cashing on assets, trash everything before vamping (if it doesn't kill the tempo).

Works great against glacier type decks like BS, HB etc, just make sure your deck has enough cash to win the credit war.

Not so useful against NEH nearpad types or RP and other asset based decks, although it's excellent for bringing corp down to 0 temporarily and beating Caprice/Ash.

In my opinion, this card is even better than Account Siphon and you can even keep the single tag, till next turn. How can the corp punish you with 0?

Funny thing is that they made this card red, as Anarchs are typically the most poor of all runners =)

P.S: People, try to be gracious players. You get Vamped or Siphoned 2-3 times or even more, take it like a man. It's part of the game which purpose is to have fun.

(Chrome City era)
Trypios 1976
Siphon and Vamp are not fun :) Fortunately, there are ways of dealing with this - FortKnoxing your HQ, Crisium or the ever popular Sealed Vault. Also, staying ahead on money or keeping a Closed Accounts in hand are great equalizers :) — dherki 4 Jun 2015
That's why Vamp is so great in a Shaper deck. Corps make a fort of their R&D keeping HQ light and it comes when they least expect it. Crisium Grid, usually goes on R&D too for The Maker's eye IF they even bother with it — Trypios 10 Jun 2015