Whenever the Runner steals an agenda, he or she must either take 1 tag or suffer 2 meat damage. 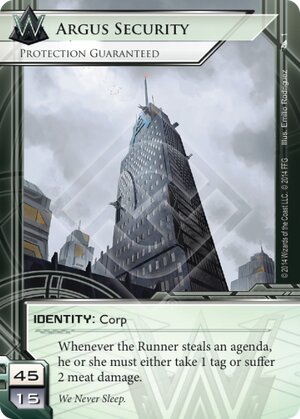 So I've played quite abit of this ID and i think i get it so lets get it out of the way is this better than PE. The answer is no, because it's not PE... nor is it trying to be... it's different. The first instinct is to go for alot of 1 point agendas PE style but really that doesn't work well it triggers the ability alot but all they will do is remove the tag or take meat damage when they feel they don't need the cards and with so many agendas getting ICE is gonna be hard. plus Weyland doesn't have traps in faction unlike Jinteki.

So then i tried going the other way all 3 points and you no what it did very well winning most games and usually very quickly with a kill and the odd very long game through points. The trail of thought was that no matter which option they choose it made it easier for me to kill them either with Punitive or Scorched and your more likely to have thoughts cards because it'll take some time for them to hit the agenda in the first place. The problem occurs tho when you can't get the kill in that situation you end up sat their for ages with no real way out hoping they just make a mistake to end it.

But after playing with it both ways i came to the conclusion that the id is actually supposed to just be played like a normal Weyland ID the usual agenda's with a kill condition built in as a back up plan and the ID will make that plan easier to execute. So way not just play any other Weyland ID well because this ID helps you when you need it the most. It helps when your losing agendas and can't score it helps get you back into the game when all seems lost. On the flip side it dose nothing when your winning, but who cares that's when you need help the least right? If anything i feel this ID is best suited to a Supermodernisum style rather than the PE style of deck.

(Order and Chaos era)
Pinkwarrior 2331
This is the first review of this ID i have actually taken notice of, because you seem to have gone out there and actually tested it out rather than make guess work on it based on the most similar jinteki ID. Well done, you made some very good points and have given me something to think about regarding argus decks. — king_mob 25 Feb 2015
Having tested this ID too, I agree with Pinkwarrior. This ID lets you protect your agenda just with your intimidating eyes. — Nex 3 Mar 2015
Jesus H that review is hard to read. So many grammar issues I barely made it through. But it was helpful to hear your results. — JohnyNFullEffect 20 Apr 2015
Out of curiosity, did you try The Board with the 1-pointer stacking? This seems like the perfect ID for that strategy... — LordRandomness 28 Jan 2016
3

I highly doubt a review is needed for this card, but just in case...

Holy hells, this is going to blow every Runner without plascrete to smithereens. Something tells me FFG really wants us to burn our opposition down to the ground.

Small agendas, SEA, scorched... Hey, I'd even put Shi.Kyu in here to screw the runner up. Everyone knows Weyland can afford these things.

I can't wait to play this!

Notorious criminal Aaron Marrón has been placed in police custody after months of a crime spree ridden city. After a tense shootout this morning, NAPD Officer Micheal Boggs managed to tackle Aaron and place him under arrest. In other news, Old Hollywood celebrity and known political activist Film Critic has been takn under house arrest. Officials say pirating of simsensies is at an all time low as she cannot effectively continue her enterprises while under NAPD Watch.

"Citizens of SanSan, New Angeles, Heinlein, and Bradbury can rest easy knowing that our highly trained security operatives are cooperating with NAPD Officers and MCA officials to keep the streets clean and safe." -Elizabeth Mills

Argus security manager Chief Slee held a charity gala last night commemorating the lowest crime rate in over five years. The party raised over 3000 credits for the gentrification of the Underway slums.

This is Lily Lockwell, reporting live.

A good way to see this id is the following: Argus forces runners to do many things the turn they steal an agenda. They either need to draw back to safety or clear a tag, both actions demanding they spend clicks. As Argus, you have to be able to punish this. A Supermodernism variant including False Lead seems like a good way to go.

Things why PE is random and Argus Security is "OH MY GOD":

This ID is the new frontier of Weyland tag'n'bang. The only default weakness is that seeing this ID the runner knows i'm a tag n bang(but usually runner thinks i'm a tag n bang seeing weyland, so...).

I suggest to see this deck(mine. Where can see what i think about this ID):

All in all, I think this Identity is trying to be a PE, but is failing.

(Order and Chaos era)
Accalion 6
If the runner plays tag-me relying on IHW, then Traffic Accident would help snipe those out of his hand. — Kroen 22 Feb 2015
The main difference between Argus and PE is the faction. I agree that just comparing the abilities, PE is probably stronger. However, PE can't run Scorched, Punitive, and Traffic Accident in the same deck. — Feasul 23 Feb 2015