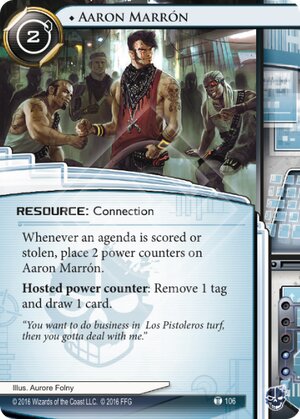 Whenever an agenda is scored or stolen, place 2 power counters on Aaron Marrón.

"You want to do business in Los Pistoleros turf, then you gotta deal with me."
Illustrated by Aurore Folny
Decklists with this card

This card looks like it's going to do a lot of work in this tag-heavy meta, but the card draw ability means he'll almost never be a dead draw in other matchups. Great addition to Criminal, along with stuff like On the Lam they're really being given a ton of tools to deal with the increasing amount of tag & kill options for Corp.

Some of the neat stuff you can do with this card:

All that aside, even against a non-kill no-tag deck Aaron can still provide you with somewhere between 5-15 clickless card draws across a game for only 2 credits! Criminal is generally considered the weakest runner faction when it comes to card draw so I think Aaron will give them a great boost in speed and survivability.

Aaron Marrón is the Beth Kilrain-Chang of Criminals.

Also, Marrón is pronounced "mah-RROAN," technically with rolled Rs. If you say it so it rhymes with Aaron, that's fine, but just know you're doing it wrong. :-)

(Quorum era)
PureFlight 1047
While I see the comparison, AM completely outshines Beth in a few ways. Seems Anarchs didn't get their "super connection" this pack. Like they need it. — LynxMegaCorp 27 Jan 2017
It's prounced A. A. Ron — Waltzard 27 Jan 2017
@Waltzard When you don't draw into your 1x Marron, you're like, "A.A.Ron? Where are you? Where is A.A.Ron right now?" — PureFlight 4 Feb 2017
https://www.youtube.com/watch?v=Dd7FixvoKBw, for the ~2 people on the internet who still don't know that reference — BeenaryCode 10 Mar 2017
They could have called him anything, it's all a fiction... nobody's going to overpronouce the surname, and they could have forseen that and called him something less likely to be problematic. If Aaron was a real world person, he'd be called Aaron Maron by everyone except his own family, and even half of them would give up bothering about the difference. — CascadeHush 12 Apr 2017
@CascadeHush It's not overpronouncing, it's correctly pronouncing. Like PureFlight said, though, totally fine to say it wrong if you want — mbzrl 19 May 2017