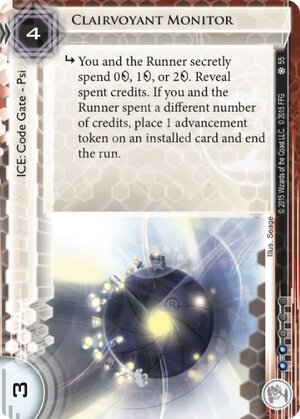 subroutine You and the Runner secretly spend 0credit, 1credit, or 2credit. Reveal spent credits. If you and the Runner spent a different number of credits, place 1 advancement token on an installed card and end the run.

It's another Snowflake! What was that comment about uniqueness being overrated?

These are in fact very similar pieces of ICE, so what are the differences?

Snowflake isn't a card that's seen much play - it's nice as a cheap barrier, except it's inconsistent at keeping the runner out and needs further funds to do anything. It's best used on a central in Nisei Division: The Next Generation, since you could at least turn it into a partial Pop-up Window, training the runner that you'll always bid 0, with the added bonus of suddenly being able to end the run when it matters.

So here we have a Code Gate variant, with a slightly improved effect and a less-effective rez cost.

With the likely resurgence of Yog.0 thanks to Net-Ready Eyes in this same pack, strength 3 code-gates are notably less appealing than they have been since Lotus Field came out. And with that card reference, we hit the real problem - Snowflake isn't the real comparison, Lotus Field is. Just when is the 1 credit discount and a potential free advancement worth the loss of one strength and one of the most powerful ICE abilities in the game?

It's not all bad - this card is bringing me one step closer to trying out a Nisei Division filled with all the Code Gates, plus Encrypted Portals and Unorthodox Predictions - but outside that sort of silliness, stick to Lotus Field.

(Chrome City era)
LeonardQuirm 969
With a built-in Tennin ability, this might also fit into that IDs game plan. What do you think? — Hongkong Koma 10 Jun 2015
I think being a 3-strength Code Gate with an unreliable subroutine wouldn't do Tennin much good. :[ — LynxMegaCorp 17 Jun 2015
Actually, I think the REAL comparison here is Datapike. They're both 4-cost codegates that end the run and do something nasty. (and cost 2-3 to break for most breakers) — Bwob 27 Jun 2015
Yep, I agree it's too risky in Tennin. This ice costs 4 to rez then asks for more credits to keep the runner out! The competitive rez price would be 3. Idiosyncratically, its ideal position is at the base of a server's ice, but it's no good as the only ice. So you need to get another ice in front of it pretty quick. Once the runner has to break it, it was still more expensive than an ice wall to rez! — melipone 23 Oct 2015
Tested it a few times and the runner most of the time bid 0. Yes, it constantly needs 1 cred to fuel, but even if you bid 2, 1 cred goes onto ANY card (like the Tennin ability). This helps advanceable ICE like Tyrant (I confess I love it), makes your Junebug a bit meaner, helps for those Tricks of Light and even advances that Mediacal Breakthrough you were sneaking out. I don't think this card is bad - it needs the right deck. — Hongkong Koma 18 Nov 2015