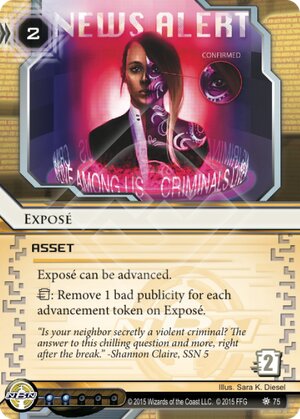 Exposé can be advanced.

trash: Remove 1 bad publicity for each advancement token on Exposé.

"Is your neighbor secretly a violent criminal? The answer to this chilling question and more, right after the break." -Shannon Claire, SSN 5
Illustrated by Sara K. Diesel
Decklists with this card

Are there CYBER-CRIMINALS in your neighborhood? Walking among us? Perhaps even in your HOME?

It's more likely than you think.

The marks are still fresh from the infamous Levy University scandal, where a seemingly unobtrusive professor was outed as a cyber-terrorist!

In tonights Exposé, we'll be covering the notorious Muertos Gang populating the Underway, a cabal of secret extortionists, thugs and public despoilers who stop at nothing to control the helpless citizens of SanSan! What's worse, they often live double lives, hiding their gang activities behind a veneer of legitimate business!

Our exclusive NBN sources are with you, keeping people informed and safe about these DANGEROUS criminals who lurk in our midst! Please consider donating a small sum to help keep these public service announcements alive! Though it costs us, we at NBN are committed to the expenditure to keep the people in the know! Don't worry about what you may have heard, or what you may have seen -- NBN is here for YOU.

disclaimer: nbn takes no responsibility for the actions undertaken on the part, at the behest, or in lieu of other multinational entities with regard to publicity management or other such activity with relation to, but not limited when considering the scope thereof, the use of illegal intrusion countermeasures electronics (ice), testing or experimentation of asset retrieval bioroids, forced, necessary or involuntary clone retirement, the alleged hire of mercenary assets or bounty hunters, illicit weapons manufacturing and sales, environmentally unsound mining practices, allegedly "hostile" company mergers and acquisitions, or property redevelopment.

This card makes Valencia cry. Aside from that it has huge potential to actually make BP removal a thing. I think Weyland will like it the most because they can score hostile takeovers / geothermal fracking, Rez checkpoints, and then bait the runner into running followed by removing w/e amount of bad pub that you prepared to remove. It is also a great mushin target.

(Order and Chaos era)
TechnoZ 18
If you Mushin down an Expose, then you can't rez it until the start of your next turn. Also, when are you going to need to remove 3 BP all at once? — tiedyedvortex 8 Mar 2015
Valencia will put 3 BP on you and wreck your face. She's horrible to play against without removal. It's a good niche card if Valencia is big in your meta. — Riconosuave 9 Mar 2015
If you put it this way... Weyland has Witness Tampering, which is equally cost-effective - even better, counting install click. Though limited to 2 BP at once. — quiciuq 10 Mar 2015
I never said Mushin, all you have to do is IAA and you either cost the runner a click while removing two BP or they let it sit and you can use it w/e you need it. — TechnoZ 10 Mar 2015
Emm...To quote your review: " It is also a great mushin target." ... — quiciuq 11 Mar 2015
You literally did recommend mushin. — cursor 4 Dec 2016
2

Expose is the best at getting rid of Bad Publicity (BP). There are other alternative, of course, but Expose will let you get rid of BP so much quicker.

If you just advance it like an NGO, if the runner does not run it, you can advance it further. If the runner runs it, you make the run useless by trashing it to get rid of 2 BP.

In NBN, it will be rare to have more than 3 BP. In which case, while Expose is better to get rid of BP faster, Increase Drop Rate could be also used for the same purpose. Not as sure fire, but it will always cost something to the runner.

But Expose shine much brighter with The Outfit, in Weyland, it would work well with other Weyland ID, but The Outfit incentize the heavy use of BP. With The Outfit, you''ll easily get to 5 or more BP. Use Dedication on Expose and you can get rid of 4 BP in one go. If the runner does not run Expose, you can get rid of ALL the BP in one shot. This is an insane value! Especially for an ID that get 3 creds for each BP. Expose basically eliminate the drawback of getting BP (by eliminating BP).

Another alternative could be Roughneck Repair Squad. But this card slow you down a lot. Sure, it get you 6 creds and let you get rid of one BP. But you cannot activate it on an install. And using a full turn to get rid of ONE BP is a lot.

At 2 influences, Expose can be used easily in BP heavy deck. Even just one, could be enough, if you use tutor card like Tech Startup and other.

To top it off, the art is very nice. An exceptionnal card.