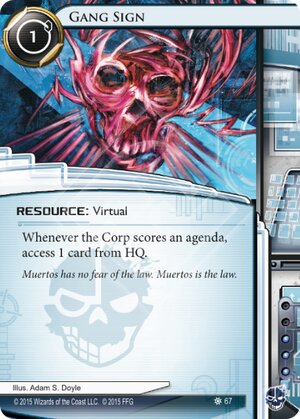 Whenever the Corp scores an agenda, breach HQ. You cannot access cards in the root of HQ during this breach.

Muertos has no fear of the law. Muertos is the law.
Illustrated by Adam S. Doyle
Decklists with this card

One of my favorite cards from The Underway. Gang Sign is the "Criminal Clot". In slow-advance decks you keep it on hand until you see the corp advance an agenda in a server you can't get into. Drop it. Watch the Corp player's face break out in sweat. In fast advance decks you can drop it immediately to hamper their FA plays.

Additionally, I really like the drama of the horrible situation it gets the corp in. Waiting won't do much to decrease the agenda count on HQ. So do you score one now and hope they miss the rest? Or do you wait for a Jackson and risk the agendas being stolen on an HQ run? Beautiful.

It synergies greatly with HQ Interface because you get to see more cards. It's great in Leela Patel: Trained Pragmatist since you can get deadly double-bounces off it. Could also work well in Iain Stirling: Retired Spook. I've seen people combine this with other on score effects like Turntable or Logos.

Overall, a great new card that we might see more of in the future. Certainly worth a try!

(The Underway era)
krystman 2780
I have one fear about this card: a creative Corp player manipulating it with Snare! I mean, Snare! is already incredibly common, so it's not like anyone needs to add it to their decks as a counter to Gang Sign. They just need to have it in hand when they score. Or better yet, have two. — elliotglendale 8 Jul 2015
Counters within counters. Devious! I love it. — KitsuAeryn 9 Jul 2015
That is a danger. But in a match-up where you expect a Snare, you may simply chose not play it in the first place. I wouldn't play it against a Personal Evolution deck, for example. In those types of decks, a lot of other cards that are good can be deadly: Maker's Eye, Legwork, Medium. I don't think that it should be an argument against those cards. — krystman 9 Jul 2015
What happens, if I have two/three installed and a set of HQ-Interfaces? Do I get to access 1+n(HQI) for every Gang Sign or is it n(GS) + n(HQI) in one access? — Crashdown 12 Jul 2015
Each card's trigger would occur simultaneously and you would resolve them in the order of your choice. Each gang sign triggered would allow you to access 1 card + n(HQI). Note that between each use of gang sign, the corp re-randomizes HQ including the (non-agenda, non-trashed) cards you accessed with the previous gang sign. — umchoyka 13 Jul 2015
4

This card is beginning to see a lot of play, especially combo'd with Leela Patel: Trained Pragmatist and HQ Interface. If you cannot get your agendas out of your hand (eg. into archives with a Jackson Howard ready), scoring one out on the board can cause a catastrophic chain of events (Leela bounce, HQ access, agenda steal, Leela Bounce again). That's at least two unrezzed cards flipped into your hand, not to mention the agenda she steals. Even if you scored the agenda after your 2nd instead of your 3rd, that can still leave your board in a miserable state, opening you up to further brutality when the runner's turn begins.

Like Valencia's Blackmail, NBN's Astro Train, or Wayland's Scorched Earth, this is a card devestating enough that it's worth specifically preparing for it if it's in your meta.

The fun thing about Gang Sign (for the corp) is that once it's installed, the runner doesn't have a choice. They're slamming into your HQ whether they like it or not. A smart runner may smell the beat-down coming, and choose not to install it in the first place, but once it's down, they're in trouble.

Runners, if you're playing Gang Sign, seriously consider playing Feedback Filter as well. You'll notice the common theme of all the above suggestions is that they all do net damage. It's expensive, but only when you actually need to use it (which probably isn't often). If you install Gang Sign when you shouldn't have, an Aesop's Pawnshop can be a life-saver.

(The Underway era)
Bigguyforyou518 1718
Hmmmm If you score 1st or 2nd click and they hit a snare you can follow up immediately with a Scorched Earth for (possibly) the game. — HollowsHeart 20 Jul 2015
Just wanted to add to the suggestion list: Strongbox (probably not good enough for a splash, but for HB it shuts this nonsense down hard) — sondayn 25 Aug 2015
2

So, after about a dozen times of looking at this card, I realized something insane: this card is not Unique.

That means that when you have two or even three out, you get Legwork every time the Corp scores. With HQ Interface, you could conceivably access the entire hand. This is sick against Glacier, as Agendas will stock up in there in anticipation of a scoring window. It is also great against FA as it can help you even the race for 7 through hand pressure.

What seemed to be a cool, fringe effect may turn out to be a real force to be reckoned with, and may even contest Legwork as lategame HQ pressure.

(The Underway era)
HolyMackerel 1051
Multiple Gang Signs do not equal to Legwork - you will access one card, return it, then access again. — alex_monk 16 Jul 2015
Multiple Gang Signs plus a HQ Interface will mean two double-accesses. Yes, you might hit the same cards twice, but that is still some serious HQ Pressure. — HolyMackerel 16 Jul 2015
Also, splashing this in Edward Kim means if you draw an Operation with the first Gang Sign, you can trash it so you don't access it the second time. ;) — WayneMcPain 17 Jul 2015
Or just Imp with anyone or Whizzard for assets/upgrades. Gang Signs & Imp are each 3 Influence, though, so it's a costly combo no matter who you run it in. — EnderA 19 Jul 2015