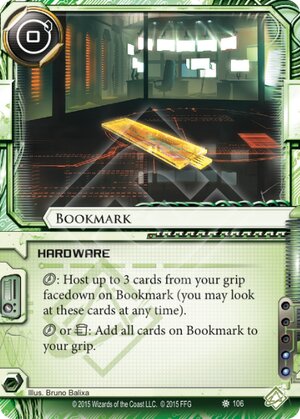 click: Host up to 3 cards from your grip facedown on this hardware (you may look at these cards at any time).

trash: Add all hosted cards to your grip.

The best use for this card in my mind is to help leverage Game Day. Dump cards you want later onto Bookmark to get full value out of Game Day. Due to the click-intensity of these two cards, this may work best in a Comet build, perhaps with Prepaid VoicePAD. Hayley Kaplan: Universal Scholar may like this card as a pseudo-Street Peddler to trigger her ability off mid-run Clone Chip and Self-modifying Code installs.

(The Universe of Tomorrow era)
moistloaf 171
I think it works best with Quality Time, for those times when you hesitate to play it from fear to discard at the end of your turn. Sure, that's click intensive, but it can later provide some protection against damage. — Lupus Yonderboi 13 Sep 2015
Another possibility is Levy. You can host cards you have in your grip for easy access after a Levy (or maybe even cards you don't want so you don't waste time drawing them again). — unitled 14 Sep 2015
One side note : it cannot act as pseudo-Street Peddler, since it's not an install-on-the-fly card. Unless you combine it with Savoir Faire or Da Vinci, but it's a janky call. — Lupus Yonderboi 14 Sep 2015
It's close enough to an instant-speed install card with Hayley. Keep your "surprise" cards on Bookmark, then when the need arises, pick them all up, install a card of the same type with Personal Workshop, Da Vinci, or Clone Chip. 0-influence replacement for Street Peddler. — Nacobs 18 Sep 2015
I have discvovered another use for the card. Put all cards onto it - run passed a Komainu, then trash it to put all the cards back in your hand to deal with potential net damage. It may not be something you can keep doing but it is amusing to turn Komainu into a 0 subroutine piece of Ice when you are low on credits and want to complete a key run. I just pulled off a legwork to net 6 points doing that; I may never do that again but I now love this card. — Cliquil 27 Sep 2015
3

So at first i was not sure what to make of this but now I think it can be a valid alternative to Plascrete Carapace that has some limited use outside of meat damage matchups. You can use it to store cards for later use on it and it also works against a Ronin or other net damage kill combos that need more than one click to pull of. The backside is that you still lose the cards and you do not want to many cards on it since you get them all at once.

All in all I will at least try it out as a plascrete alternative that lets you get rid of useless cards without trashing them.

(The Universe of Tomorrow era)
MrOshova 11
This also seems like a great way to keep Faust fed without increasing hand size. You can ProCon three times with a full grip and put those cards on Bookmark for later. Or if you want to Levy but keep that key card in hand - bookmark it! — LynxMegaCorp 12 Sep 2015
It also happens to be excellent Power Shutdown fodder whenever it's empty. — FarCryFromHuman 12 Sep 2015
Has saved a runner from Punitive Counterstrike more than once.. — Spica 12 Sep 2015
I think this will be good in decks with lots of card draw and it adds defence against all the kill decks too. I can also see anarchs using this card too as it gels with faust, wyldside, and duggars — DGB123 12 Sep 2015
I can see it doing wonders in Apex for recovering after Apocalypse. — Absolium 14 Sep 2015
Can you host more than 3 cards? It says a click to host up to 3 cards, could I for example do it again and host another 3 for a total of 6? — Tomb 16 Sep 2015
@Tomb Yes, each click lets you host up to 3 cards. Like any other paid ability, every time you pay the cost, you gain the effect. If there were a limit on the number of cards it could host, that would stated explicitly.. — NerdimusPrime 23 Sep 2015
It is also à great way to preserve some cards for late game, as no runner wants to lose its — Him 15 Oct 2015
...single LARLA — Him 15 Oct 2015