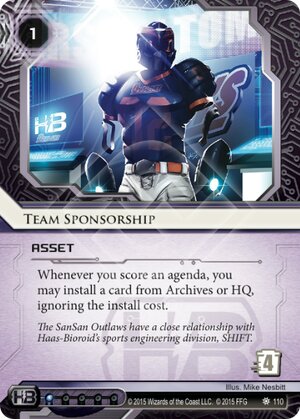 Whenever you score an agenda, you may install a card from Archives or HQ, ignoring the install cost.

The SanSan Outlaws have a close relationship with Haas-Bioroid's sports engineering division, SHIFT.
Illustrated by Mike Nesbitt
Decklists with this card

In a game recently I had one of these, a San San and a Cyberdex Virus Suite installed vs Noise. I had rushed an Astro early, so had a counter. I install on the San San, he installs Clot off of a Peddler, milling an Astro into Archives. I double advance the Astro, rez the Cyberdex/San San and score, install the Astro from Archives, use the two Astro tokens to score it, install a Breaking News from hand and use the new Astro token to score that - 5 points, one paid ability window, gg.

This card allows you to do nuts things :)

While it may seem relatively innocent, I think this card is a pretty scary proposition.

At one cost and four trash, it's certainly ticking all the boxes for a nice little asset. To maximise your triggers, you want it in a deck with lots of small agendas that are scored fast, which is fine in HB and even better over in NBN. And that's fine, as the card is a mere 1 influence!

What works with its ability? Well, anything that gives you a benefit from installing cards. Haas-Bioroid: Engineering the Future and Near-Earth Hub: Broadcast Center both spring to mind, as does Turtlebacks. Both of those are decks which like extensive remote play anyway, so this card fits in perfectly. HB:EtF is frequently used as a glacier ID due to the 'discount' when building deep servers, but this card lets you continue to build servers (remember, it can install ice!) even while scoring agendas; advancing out a 5/3 gives you (at least) a credit and a click back as well as whatever the effects of the agenda are. With Turtlebacks in NEH, scoring an agenda can give you multiple credits and card draw as well, again continuing to build your board position when you score.

Lots are decks are already running amazing targets for this card as well. Consider cards which are trashed on use, like Cyberdex Virus Suite, Executive Boot Camp, Tech Startup or Marcus Batty. With CVS, suddenly Clot isn't the thorn in your side it has been previously in a Fastrobiotics deck; fast advance out through your Virus Suite to clear the clot, then reinstall CVS on the score ready for the next agenda.

Then we come to cards which are must-trash for the runner... If you can get a toe hold, you can start to bring back Caprice Nisei or Ash 2X3ZB9CY if you've lost one to RnD digs or remote pressure. They protect your agendas for your next score. And with a second Team Sponsorship ready to go, you can even install the next agenda in your scoring remote as well.

If no other targets are available, bringing back that spent out Adonis Campaign or trashed PAD Campaign is as good as anything. The one thing more demoralising than paying 5 to trash that Eve Campaign is to see the corp bring it back for free a couple of turns later.

Team Sponsorship gives you both recursion and free clicks whenever you score, which is what you want to do during the game anyway. It's cheap, it's easy to splash, and it's tough to trash. It's a really solid card, and I would not be the least surprised to see this cropping up in glacier, hybrid and fast advance HB, in fastrobiotics, NEARPAD/Turtlepads, Gagarin, even RP with the selection of juicy targets for it.

(The Universe of Tomorrow era)
unitled 465
I don't want to even get into how crazy this will be when Advanced Assembly Lines comes out... h/t to Angedelo for pointing that one out to me. — unitled 8 Sep 2015
Adonis, trashed NEXT Silvers, Cyberdex Virus Suite, SanSan City Grids... the list goes on. It's both a defensive and offensive card and is insanely strong. Good review. — hi_impact 8 Sep 2015
I think it's one to watch. It has to trigger twice before it's good, until then you'd probably prefer another copy of one of the cards it can bring back, versatility notwithstanding. It can definitely do good things, but I think the jury's still out. I'm surprised you think HB likes small agendas. I think it's the faction least likely to play 3/1s. It has domestic sleepers, but that card often goes alongside 5/3s because of deckspace issues. I imagine this is the card that is supposed to make Research Grant a thing, but... no. Just no. — Greasythumb 9 Sep 2015
Fast Advance HB will typically run three ABT and three Vitruvius, then something like NAPD as far as I remember. Domestic Sleepers can round it off. This card turns Domestic Sleepers into another Interns as well, meaning the extra copies in your deck for getting up to 7 aren't just Archer food! — unitled 9 Sep 2015
There are plenty of HB fast advance decks around, looking back through the recent tournament winners there's a good split with half or so running 11 agendas (3 ABT, 3 NAPD, 3 Vitruvius, then 1/2 Chronos sometimes with a Pet Project). Also, it turns spare Domestic Sleepers in your deck into more Interns as well as Archer food. Can definitely see in this faction, especially in Fast Advance decks. — unitled 9 Sep 2015
Why, oh why, is this SCARY thing not unique? o.O With 3 of these on the field, scoring a 1/2 agenda from hand in 3 clicks let's you recurse 3 lost ICE from archive and immidiately install them as ICE number 5, 6 and 7 in front of a server for free, which is plain riddiculous! — Krams 17 Sep 2015
How about combo-ing this with Quantum Predictive Model behind a Data Raven? You could move that right alongside Franchise City and score a quick 3 AP for 6 credits, while sticking a tag on the runner. — fetish 20 Nov 2015
I think Quantum Predictive Model won't work because the wording on kitty cat is "Add" instead of "Score". — Tasku 25 Feb 2016
7

This is the crummiest card printed since AstroScript Pilot Program. First off, it's limited to pulling cards from archives or HQ; R&D is out of the question. On top of that, you have to score an agenda to even use it's ability! I mean, give me a break, I don't want to put a bunch of 1-pointers in my deck that I can fast advance to take advantage of this every turn. That would require big agenda density, and with it's 1 influence cost, it's not even worth putting into Near-Earth Hub: Broadcast Center or Haarpsichord Studios.

Turtlebacks almost makes this worthwhile, but it's not even in faction. Plus, it's trash cost is only 4, so Whizzard: Master Gamer can shut this down no-problem. Maybe if the trash cost were upped to be on par with SanSan City Grid, and it let me pull cards from R&D or it said 'and' instead of 'or', and instead of just negating install cost it gave me credits equal to the install cost, it might be worth playing. But as written, this probably won't end up in any half decent deck.

(The Universe of Tomorrow era)
Pikeman 279
Wat. — Riconosuave 23 Sep 2015
Best troll review since bblum's one about Astro — Positron 23 Sep 2015
10/10 trollin' — king_mob 24 Sep 2015
That's pretty funny, as Astro STILL is the most overpowered card in the game. This card is really, really good, if you are the corp. In my experience so far I do not like playing against it. True, Whizzard trashes it easy, but he trashes everything easy; and since it costs one to rez, it isn't too big a lose if he does. You probably won't rez it until you use it so you'll get your moneys worth anyway. — quailman2101 30 Nov 2015
Whoosh. — EnderA 2 Dec 2015