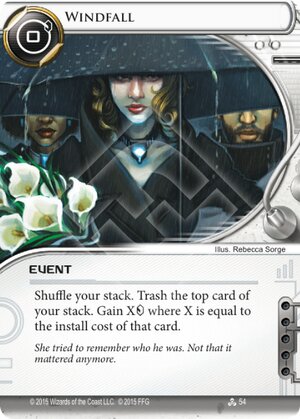 Shuffle your stack. Trash the top card of your stack. Gain Xcredit where X is equal to the install cost of that card.

She tried to remember who he was. Not that it mattered anymore.
Illustrated by Rebecca Sorge
Decklists with this card

There are several problems with this card:

So, you're locked into a resource (or maybe Magnum Opus) based economy plus relying on an event to get you money, which gets worse when you play good event economy cards like Sure Gamble, and worse when you play more recursion. Hard to see an upside, no matter which way you look at it.

I've got a MaxX deck that needs something like this to go with its recursion but it depends:

Does Windfall pay out on events or does the card trashed have to be installable (Resource/Hardware/Programme)?

(Data and Destiny era)
paulxthompson 235
Has to be installable. Events have play costs, not install costs. — tiedyedvortex 4 Nov 2015
Events don't have an install cost so even if Windfall "works" on events the returns would be 0 credits. — FarCryFromHuman 4 Nov 2015
Basically, the only decks that would even consider this card are MaxX and Exile event-lite decks, and even then, it'd be a stretch. I think this card will see it's day, but not until runners get the same kind of stack manipulation that CI can pull off with Power Shutdown. Even then, CI gets a win without a clot or other agenda point manipulation, Windfall gets, at most... 18 credits and a monolith in the heap. — Sabin76 4 Nov 2015
I think that there won't be any ''real op tremendous imapct on this game'' if Windfall doesn't have first sentence about shuffle. Rolodex, monolith, all that stuff is very bulky and unstable to rely on. But in the end we do have what we have. One day, maybe... — tilindir 5 Nov 2015
Netrunner players don't like RNG in their hands, not criticizing simply stating the consensus of the community to have guaranteed advantage over chance odds. odds of making money off of this through your deck construction and cost balance a la planned assault and others, go for this card because it's able to give you a lot of credit if you need them and build a deck that might try to win by the runners own luck instead of corp psi games — jumping_down 2 Jan 2016