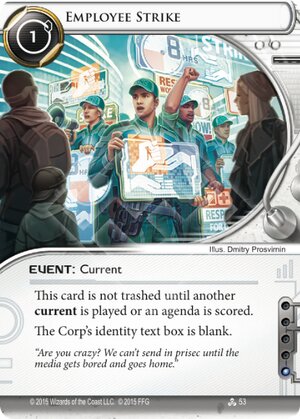 "Are you crazy? We can't send in prisec until the media gets bored and goes home."
Illustrated by Dmitry Prosvirnin
Decklists with this card

While it's tempting to write this off as "The runner version of Cerebral Static" and call it a day, I believe a closer examination will reveal it to be far more powerful.

Consider how turning off ID abilities differs across both sides of the Netrunner table. Runner IDs, broadly speaking, give them minor economic boosts, or small rig enhancements like or that would normally cost deckspace, drawtime, and a or two. Though seemingly minor, these little incremental boosts can be game-unbalancing over the course of 20 turns. Turning them off temporarily, however, is usually not going to give the corp anything other than a very tiny economic edge until another current is dropped or an agenda is stolen.

For the corp, turning off an ID ability is most impactful when it actually opens a scoring window, or when it throws a huge wrench in a decklist that relies on the ID too heavily. Cerebral Static probably gets the most mileage against Noise, Leela, or possibly Nasir.

What about the runner, though? If Haas-Bioroid: Engineering the Future is any indication, Corp IDs are designed in pretty much the same way - minor economic advantages or efficiencies. Or...are they?

I could keep going. The point is not that corp IDs are more powerful than runner IDs - they really aren't. But (at the moment) Corp IDs are more likely to fundamentally change the way the game is played, so allowing the runner to turn off those abilities suddenly can be much more devestating.

(Data and Destiny era)
Bigguyforyou518 1711
Another thing to consider is what it takes to shut off a current on both sides. Runners can hit agendas from any one of 4+ different remotes at once and have more clicks to do so. All it takes is one simple click to make a run on RnD and get lucky and there goes the Corp current. The Corp however has to have a scoring window (or a 2/1 in hand) and most likely spend their entire turn to shut down a current. Though on the flip side, Corps (up until recently) have always had more impactful currents than runners and are much more likely to have deck space for them. But overall I think just due to the nature of Corp play, Employee Strike is much more powerful than Cerebral Static. — WayneMcPain 5 Nov 2015
Those are great points. I think the proliferation of fast-advance often gives the corp a strong answer to it, but I wholeheartedly agree that even today, Corp currents are more powerful, so shutting them off with this is a great bonus (I'm looking at you Targeted Marketing, Housekeeping, ELP, and Media Blitz!!). — Bigguyforyou518 5 Nov 2015
Sorry, I meant 4+ servers. — WayneMcPain 5 Nov 2015
Hmm wait..how this will work with Harpsichord on archives. You access all card at once? I thought you choose order. therefore after scoring First agenda current is trashed down and ID works again. Am I missing something? — Beyo 6 Nov 2015
A runner current doesn't trash when a runner steals an agenda, so you get to see the whole archives. — schwal 7 Nov 2015
I was so happy when I first saw this card. Why? Because of Blue Sun. A super OP ID in my opinion. What other ID makes several very popular runner cards next to useless? What other ID can start their turn with 0 credits and still have more than enough credits to Midseason, double scorch the runner? Anyway, I love this vs Blue Sun, but vs several other IDs listed above. Great review! — quailman2101 18 Nov 2015
but also^ vs several other... — quailman2101 25 Nov 2015
Your review has stood the test of time! — EnderA 11 Sep 2018
4

I would just like to point out that it is now theoretically possible to tie a game. Harmony Medtech: Biomedical Pioneer. If the runner has six and the corp scores an agenda bringing them to six while knocking out the current, suddenly both sides have the required agenda points.

(Data and Destiny era)
schwal 12
I think that the corp would still win before the current got trashed in the same way that the runner would still win if they stole the last agenda from Personal Evolution with no cards in hand. — forktines 5 Nov 2015
Those are two separate scenarios though. With PE - it is an issue of the PE trigger occuring AFTER the win condition for one player has been achieved. Here, that win condition has been achieved simultaneously by each player. (Due to the changing game state from a 'win' being 7, then changing to 6) Although I've no doubt there will be Word of God on this one way or the other... — Softman25 5 Nov 2015
Simultaneous things don't exist in Netrunner. Effects are resolved one after the other, always. Active player has priority, thus their effects are first. I'm pretty sure Corp wins. — Orbital Tangent 5 Nov 2015
Agree: active player takes priority, corp wins. Besides: if the runner played this card *before* he steals an (otherwise game-ending) agenda against Biomed, he deserves to loose anyway. — Crashdown 5 Nov 2015
Currents aren't trashed as active effects, they're a constant ability. They are removed straight away before triggers. Maybe the runner is on 6 and the corp is on 4, but the runner decides to play this to knock out a corp current. Then the corp scores a 2 pointer. Game ends in draw. — unitled 5 Nov 2015
Sorry, in my example, the runner would have to play it before they got to 6... obviously :P Ooops. Also, I'll add that Lukas has tweeted that this situation would lead to a tie, hopefully it'll make it to the first post-D&D FAQ. — unitled 5 Nov 2015
My feeling (and this is not based on the rules at all) is that either the runner should win because they got to six first even if it wasn't the limit at the time or play should continue until someone scores another agena. — schwal 7 Nov 2015
Also I can't see how it could possibly be a corp win. Either the effect triggers before the points are scored and the runner wins 6-3 (for sake of argument) or it triggers after, leaving the score at 6-6. What happens after that is certainly up for debate if it happens in that order, but it seems bizarre to say the least to give it to the corp at that point. — schwal 13 Nov 2015
3

Due to the asymmetrical nature of Netrunner, there is more to consider when comparing similar Corp and Runner cards than simply face value. For instance, Kati Jones and Shell Corporation are functionally similar. However, Shell Corp can be trashed much easier than Kati. Also, since the Corp only has 3 clicks to spend per turn, it is significantly less efficient for the Corp than Kati is for Runner. But Shell Corp can also be bluffed as an agenda, protected by Snare!. These small, indirect interactions make comparing the two cards at face value very difficult.

It remains to be seen if Employee Strike will be a meta shifting card. On the one hand, some very popular Corp ID's, such as Replicating Perfection and NEH, suffer pretty heavily from this card. On the other hand, it is a deck slot and an influence per copy, and spending influence on cards that don't directly help you score points can be risky. But if one particular Corp ID tends to give your deck hell, it may be worth consideration as a one of in your deck.

(Data and Destiny era)
WayneMcPain 417
So basically, don't play this card against MedTech. Even if you were to cause a tie, you would have been better off not playing it, because, you know...you'd win. Of course, if the Corp has played a current you need to get rid of, I guess it makes sense. But just don't do it. — Friff14 5 Nov 2015