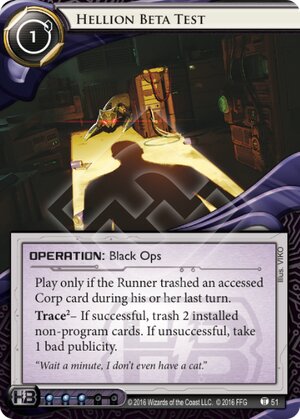 Play only if the Runner trashed a card while accessing it during their last turn.

"Wait a minute, I don't even have a cat."
Illustrated by VIKO
Decklists with this card

This card is great! Unfortunately the trigger will be meet regular so that's covered, and if you play it out of HB you should have the cash to make the trace. The wording is a bit awkward, it should have been:

"Trash 2 pics of hardware and taste the runners salty tears, otherwise better wait for a later use. If you feel like it you could trash resources but that's a waste"

No tag needed, surprising given how common the trigger condition is meet and potential devastating to the runner. Also the trigger condition helps with making the trace if they used credits to trash. The card is a massive improvement over Hellion Alpha Test (same influence mind you) given you the choice of what to trash in any combination. Would it have much use out of faction? Probably not given the influence, if you spend one more you get Scorched Earth and win the game but a good option for HB to strike back at the runner other than brain damage. In my opinion a very good addition to the HB card pool that makes Hellion Alpha Test completely obsolete (sort of the only complaint)

(Escalation era)
Stigma 16
"Trashed an *Accessed* corp card" This is one restriction that won't be a killer but it will be one to watch out for, there is plenty of stuff on the runner side that lets them trash things without ever accessing them. — killj0y 20 Oct 2016
This card is super powerful in my opinion. Put it in any asset heavy deck and its prerequisite cost will regularly be filled. And there are a lot of great targets including several resources like Temujin Contract, a full Daily Casts, ProCo, a shard, Kati, or a pesky Film Critic that is messing up all your ambush/psi agendas. — quailman2101 21 Oct 2016
@quailman2101 Id like to just point out you've only mentioned resources in your comment but Beta test can actually hit hardware as well in some case's hitting a console could prove to be more powerful an effect. — Pinkwarrior 5 Nov 2016
@Pinkwarrior Yes of course, and they are probably better targets many times. I just mentioned resources that were worth targeting because Stigma implied they weren't worth using this card on. — quailman2101 14 Nov 2016
Can it fire when the runner is using Salsette Slums? — 5N00P1 24 Feb 2017
@5N00P1 Probably not, as the ruling (at least per UFAQ) is that the card is removed from the game INSTEAD of trashing, meaning the runner never trashed an accessed corp card. http://ancur.wikia.com/wiki/Salsette_Island_UFAQ — BeenaryCode 10 Mar 2017
2

A solid form of punishment, but runners can play around it. Unfortunately, it doesn't trigger on Stargate, as the trashed card isn't accessed. If the runner doesn't see it coming, however, it is easy to bait with a naked piece of asset economy. This sort of thing depends upon the corp already having a credit lead, however, and if both players are floating around 15 credits, HBT probably isn't worth it. Where this really shines is against a built-up runner who has just pillaged the remote, perhaps trashing some defensive upgrades, a Rashida Jaheem, or some other asset meant to bait an agenda. In that case, the runner has likely expended a good chunk of credits passing ice, more trashing cards in the server root -- and they've certainly satisfied the trigger condition! Then, HBT can be a blowout, potentially trashing a console, another piece of important hardware or a resource like The Turning Wheel, and if the runner is now over MU from hardware trashing, they are likely to lose some programs as well. If the runner going through the remote didn't open a scoring window, a choice HBT certainly will; if there was already a window, HBT might stretch it to several turns -- or, frankly, win you the game, if the runner's deck was already low and they had binned important duplicates.

The bad pub clause is almost unimportant, but hurts one niche use-case for HBT: the situation where the corp can fork the runner by only bidding a middling amount of money on the trace (enough for the corp to keep cash for rezzing ice, say, or advancing cards), but enough to hurt the runner either paying through the trace or losing econ resources. Taking bad pub to do this makes the option less attractive, though it technically still exists for end-game scenarios.

Most corp decks would rather run Hard-Hitting News instead, given all that one can do with tags, and that HHN's trigger condition is easier to meet. Still, for a deck in HB that doesn't want to invest all the influence necessary for HHN and tag punishment, HBT can serve as an acceptable replacement for ways to punish a run.