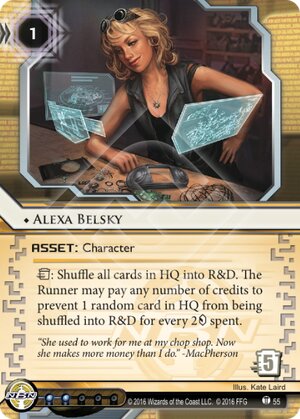 trash: Shuffle all cards in HQ into R&D. The Runner may pay any number of credits to prevent 1 random card in HQ from being shuffled into R&D for every 2credit spent.

"She used to work for me at my chop shop. Now she makes more money than I do." -MacPherson
Illustrated by Kate Laird
Decklists with this card

Some cards ... well, you gotta wonder what the thought process behind them was.

Alexa Belsky lets you shuffle HQ into R&D without drawing any cards afterwards. It's a trash ability so it can trigger before the runner accesses cards. That bit I understand, FFG intended this card to be a panic button for HQ access. And it would work, the runner wouldn't be able to access any cards in HQ.

Except for some reason FFG thought it would be a good idea to give the runner the option to prevent X cards going into R&D by paying 2 per card. This unfortunately means Ms Belsky is effectively working for the runner. When you pop her you give the runner a choice: let you reduce your hand size to 0 or pay a bunch of credits to keep their access worthwhile. Assuming the runner is using Legwork or two HQ Interfaces and you have 5 cards in HQ it would cost the runner 6 to preserve the maximum number of cards accessed. Were you to select the cards to shuffle in R&D the runner would need to pay the maximum (10) to ensure agenda's remain in HQ, but this is not the case.

Will the runner have 6 available? Probably. Will they pay that money? That's the bigger question.

You see, the runner will probably not object if you shuffle your entire hand into HQ. You'll have less options available to you for the next turns. Even with Jackson Howard for drawing it'll take you 2 clicks to get back up to 5 (one card is free due to mandatory).

Sure, you'll prevent the runner stealing agenda's from HQ, but in the process you'll massively slow down your own game plan. The only moment you would want to do this is when it would stop the runner from winning, an emergency play. But it would still prevent you from losing that run, it wouldn't help you win. And winning becomes harder if you need to draw back up first. It would work though if you have a card installed that you can advance next turn for the win.

But... if HQ is so vulnerable isn't the runner simply going to run R&D? And is your scoring server so impenetrable? Wouldn't it be simpler to just include better ice in your deck, or a proper defensive upgrade?

To find some upside to this card: 5 to trash is good. Not that the runner would bother trashing Alexa Belsky.

Long story short: this is a top contender for worst card of the Flashpoint cycle.

(Daedalus Complex era)
Silv 339
He means 6 credits... 2 per card for 3 cards. — Goldstep 18 Mar 2017
Good catch, thanks. I was indeed counting from the wrong direction. Will update the review. — Silv 18 Mar 2017
I actually quite like this card. Oftentimes she is innocuous enough to be ignored, and with SAU or DBS, you can draw up faster. The not drawing is a pain, though. — Handsome Jack 18 Mar 2017