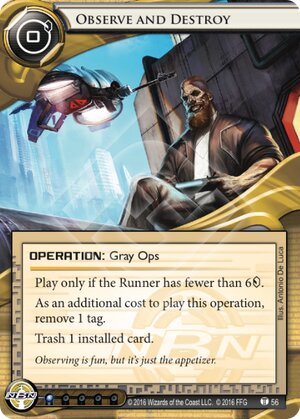 Play only if the Runner has fewer than 6credit.

As an additional cost to play this operation, remove 1 tag.

Observing is fun, but it's just the appetizer.
Illustrated by Antonio De Luca
Decklists with this card

Normally, I only write reviews for cards I've played. This one, though, I haven't played, and there's a good reason for that.

Instead, I'm writing this review to say: if you ever considered playing this, play Retribution instead. It's the same influence cost (but a different faction), and costs 1 more to trash programs and hardware (and 2 more to trash resources because you have to use the basic action); but it doesn't require keeping the Runner below 6, and it doesn't require spending the tag. So in effect, Observe and Destroy saves the Runner , 2 (unless they're going tag-me, which is probably a bad idea if your deck contains this sort of tag punishment card), making it more expensive than Retribution in basically all circumstances. And, well, the requirement to keep the Runner below 6 is a very hard one to satisfy nowadays, especially with Closed Accounts having rotated.

The only niches Observe and Destroy might have over Retribution would therefore be a) as a flexible punishment card that gains value when the Runner goes tag-me (the problem is, it doesn't gain very much value, only a credit or two, and your deck would have to keep the Runner under 6 permanently for this to be worth it); b) if you have some sort of jank combo that requires trashing your own installed cards (but you can do this way more cheaply than spending a card and a click and a tag and keeping the Runner poor; and if you're willing to spend clicks+cards to trash your own cards, why not just overinstall them?); or c) you're in NBN and can't spare even 1 point of influence for Retribution (I guess this is just about possible).

You can imagine the only sort of deck that could want this, therefore; something that's in NBN, tag-heavy, and tries to keep the Runner poor (maybe Spark Agency or SYNC). But those decks don't normally want program/hardware trashing anyway; if you're keeping the Runner poor and getting the tags to stick, your deck is already on the point of winning, and you'd prefer something that's better at actually closing out a game. It's also rare for that style of deck to become particularly tight on influence (frequently it can fit High-Profile Target despite the five-dot cost), so probably you'd be able to afford to fit a Retribution or two if you preferred that mechanism of winning the game.

Another similar card that's worth mentioning is Keegan Lane. This has a very similar effect to Observe and Destroy, and the same cost, but different timing (and no 6 restriction). However, Keegan Lane is much better; the reason is that it's much easier to get a tag to stick mid-run (e.g. Ping, Thoth, Turnpike, maybe even Funhouse) than it is to tag the Runner on your own turn. Using Keegan to trash a single icebreaker normally isn't game-winning on its own; but with a little bluffing/mind-games, you can often use Keegan to trash the opponent's killer while they're locked into encountering a destroyer, and get two or more trashes for your single tag. Keegan Lane is therefore quite a good card – but despite that, it's still a pretty niche effect that normally needs a deck built around it. Observe and Destroy has much less upside, and is also much harder to connect with; so given that it's this much worse than a highly niche card, and is also pretty much entirely outclassed by a 1-influence card from another faction, it really isn't surprising that it isn't very strong. So even if you do somehow have a deck that's a perfect fit for Observe and Destroy, it nevertheless won't be doing enough for you to be worth the deck slot.

It have only specific uses. Lets assume some situation

Fisrt, it need to ne comboed with ca. And then u can trash any cards u want.

So it means temporary tags punishes like breaking news Should be scored with 2 clicks left.

The question is u really need to trash runner card when u hit ca? The target will be their core breaker or hardware.

But their at 0 credit now, With no resource if they r tagged. They can't afford breaker already.

It means this card is overkill.

It will be useful for magnum opus, But shapers have clone chip.

more bad knews is anarchs have a recrsion,too.

It might be good for hard kill decks to kill plascrete and obelus. (Beyoken did it at world chanpionship!)

And there is 1 more usage for it.

Remember accelerated diagnostics ignore the additional cost, And its not 'when runner taged' opration, but 'remove 1 tag'

That means u destroy plascrete, or even 'city hall' with accelerated diagnotics, without removing tags for boom.

The problem is that 'runner fewer than 5credit condition' is still remaning, Which involves ca =tag.

(Escalation era)
jjjrich1 22
This card is not a "winmore" card. It's a "kick 'em when they're down" kinda card. It ensures the Runner can't get back up. It seals the deal. HHN pushes them down, OaD murders them. — HolyMackerel 18 Oct 2016
The card can have its use but agreed, by the time you want to play this you are probably already winning hard. Probably not worth the deck slot. — Stigma 20 Oct 2016