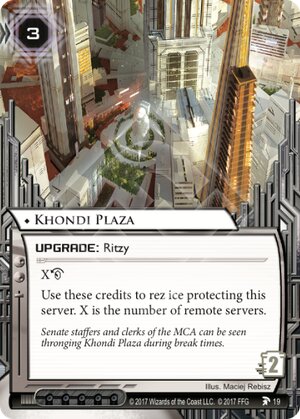 Use these credits to rez ice protecting this server. X is the number of remote servers.

Senate staffers and clerks of the MCA can be seen thronging Khondi Plaza during break times.
Illustrated by Maciej Rebisz
Decklists with this card

A defense supporting upgrade for horizontal decks (asset spam and the likes).

Easy to trash (2) and unique (Rumor Mill). On the other hand it's an upgrade so it can be installed on centrals as well as a remote scoring server.

The big question with this card is "when is it worth it?". Let's assume you've got 2 remotes, that's a 2 per turn discount. Most decks have at least 3 or so remotes, even if there is only one scoring server there is typically at least a Jackson Howard and a few PAD Campaigns. At 3 remotes Khondi Plaza delivers 3 for ICE. That's a decent discount. Is it enough to slot it? Probably not.

However once you get decks with 5 or more remotes the ICE savings start to add up. Being able to rez heavy ICE cheaply means you have a real shot at keeping the runner out of a server.

Since Khondi Plaza is unique though you have to choose which server you want to protect. This can be very match-up dependent. If you run a fast advance deck and you're against a shaper R&D is probably a good choice (fast advance doesn't require scoring remotes and shapers like to run R&D).

A potential issue in the deployment of Khondi Plaza is that the runner may run your server just to get rid of it. Timing the install and rez well is important in such a case. You'll want to make the install and rez coincide with the presence of a powerful ICE you can then rez cheaply. Note that you can delay the rez until you need to rez a piece of ICE (Timing structure of a run 2.3 has a non-ICE card rez window).

All in all this is a powerful support card for ICE in horizontal decks.

(Daedalus Complex era)
Silv 335
This card is just so flawed in concept. You only use the credits when you rez ICE, which generally only happens when they run the server. If they run the server and they get in, they will probably trash this. For it to actually pay off more than once, you need to successfully keep them out of the server for a turn, which is tough to do these days. I did make a jank deck based around this, though! — Netrunnerunner 16 Mar 2017
Maybe this has jank potential in decks that rez ICE _outside of a run_! Otherwise... What Netrunnerrunner said. — Krams 16 Mar 2017
The chance of a big payoff is indeed pretty small. But if you have an asset spam deck it could still work. Consider the rez cost is 3 credits. If you have 7 remotes that's a 4 credit win on rez. And ICE actually has the best chance of stopping the runner the turn that it's rezzed (due to being unknown) so the odds of it surviving a turn aren't that bad. — Silv 16 Mar 2017
Might work... If you pay the full 7c on the rez of the ICE it's probably around Tollbooth class of stopping power and if the runner thought you only have 3-5 creds and can't rez something that big he might be unprepared. — Krams 17 Mar 2017