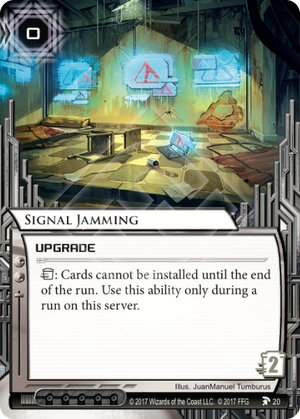 trash: Cards cannot be installed until the end of the run. Use this ability only during a run on this server.

Illustrated by JuanManuel Tumburus
Decklists with this card

Pretty much a one use Navi Mumbai City Grid. This card could be pretty potent in rush decks that hat cards like Self-modifying Code, Clone Chip, or Street Peddler. Probably est with a destroyer so they can't just jack out, run, and SMC/Clone/Whatever their thing again. Overall, a fairly good card that could be a useful one-of.

(Daedalus Complex era)
Handsome Jack 1595
I wonder why they made a neutral version of Navi so shortly after Navi that basically is worse in every way. Runner card installation during a run is almost always a paid ability on a non-icebreaker card. (Corp card installation during a run might be a weird HB ICE subroutine, but you probably wouldn't want to stop that as a corp...) — Krams 7 Mar 2017
Unlike Navi, this stops the Conspiracy breakers from installing from the heap on encounter. — PureFlight 7 Mar 2017
Ahh, right, I totally overlooked that. Okay, not a strictly worse Navi. Thanks for pointing that out! — Krams 7 Mar 2017