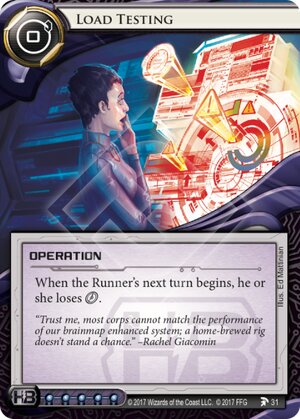 When the Runner's next turn begins, they lose click.

"Trust me, most corps cannot match the performance of our brainmap enhanced system; a home-brewed rig doesn't stand a chance." - Rachel Giacomin
Illustrated by Ed Mattinian
Decklists with this card

Making the runner lose a click sounds great for setting up a scoring window, but Load Testing requires a click to play itself so in effect you trade a click for a click. That's not to say that's not useful occasionally. The most prominent scenario I can think of (I fear I have a really poor imagination) is that of a 4/2 agenda. You install it on click 1, advance it on click 2, do a Load Testing on click 3. And then you need to have ice that's good enough to keep the runner out if they have 3 clicks to spend but not if they have 4 clicks. That means bioroids, specifically:

The other bioroids cannot be clicked through with 3 clicks (because they require a pair of clicks to break up to 2 subs or because they have only 1 or 2 subs).

Of course you can always stack bioroids, e.g. Eli 1.0 behind a Fairchild 2.0 to get the same effect.

Still, this feels rather brittle. How often are you going to be able to actually use Load Testing without the runner having breakers installed? I suspect you can go through most tournaments without this trick ever working.

Are there other options? Defensively it's a decent Hyperdriver counter (doesn't stop the runner getting 2 extra clicks but it's likely they were counting on getting 3 extra clicks and this message up their plan) if all you need is to delay the super turn slightly.

I'm pretty much drawing a blank here what else you can use it for.

(Station One era)
Silv 344
Another important ICE to mention here is Turing. Bonus points if the runner has an AI installed and still doesn't get through to your 4/2 :D — Krams 17 Apr 2017
Perhaps this could be used with hard hitting news so the runner doesn't have enough actions to clear tags in their turn - that's pretty janky though as you'd need the money to land the tags, this, hard hitting news and something to exploit the tags — DGB123 14 May 2017
There are times in a game I click for a credit because I literally have nothing else to do on that turn. I can see times when this would be a better option. Also, with Jeeves, this could be a nice fourth action. It's hard to imagine giving a deck slot to it though. — CascadeHush 1 Jun 2017
If a prison deck can setup multiple Clone Suffrage Movements then this card becomes brutal in the late game — sodwyer 22 Jun 2017