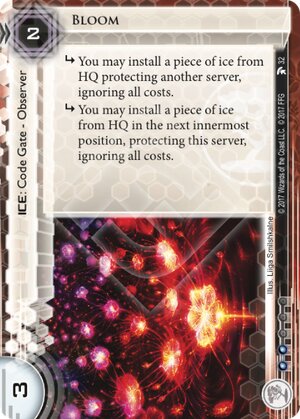 subroutine You may install a piece of ice from HQ protecting another server, ignoring all costs.

subroutine You may install a piece of ice from HQ in the next innermost position, protecting this server, ignoring all costs.

This card is a variation on the old Minelayer, but it plays a lot like Architect. Like Minelayer, it is only useful in a deck running a lot of ice. Firing both subroutines and placing ice is very important to its success. This success is two-fold:

There are other minor benefits to this as well: It makes postitional ice easier to play. This could help in building that deadly Cell Portal server.

It also has some drawbacks: You need to play tons of ice before you can consider this card, because we are installing from HQ here. With no ice in HQ, this card is blank, though I often find ice piling up in my hand anyway. Also, it is weak to Yog.0, but then again it costs a fraction of that card.

It is at home in glacier decks like NEXT Design: Guarding the Net if they can afford the influence. It works well in any glacier jinteki ID, like Tennin Institute: The Secrets Within, Pālanā Agroplex or especially Jinteki: Replicating Perfection.

(Station One era)
Severijn 540
Two words. EDGE OF WORLD. Too bad its rotating, soon. — LynxMegaCorp 4 Apr 2017
Fun fact: This is the first __Observer__ that is not also a __Sentry__ and a __Tracer__ and the second one that doesn't tag the runner. I have absolutely no idea where this subtype is going... — Krams 15 May 2017
Combine with mum or amazon. — chrispedersen 1 Aug 2017
Everyone posting is ignoring the elephant in the room--the fact that sadly, this card will almost never fire, and certainly will not fire more than once per game in all but the most abnormal circumstances. — Chezni 11 Jan 2018
Well, I consider it a win if they break this every time. That's not a bad tax at all from a 2 rez piece of ice. Anyways, I'd like to point out that this works well with MTI Mkwundu as an opener. Also gross with Estelle moon. — Severijn 13 Jun 2018