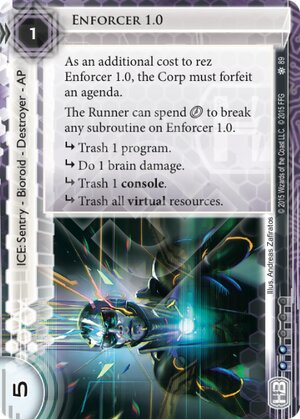 So, Enforcer is a weird card, and one of the most interesting cards in Old Hollywood. Its most obvious comparison is Archer, the other piece of ice you have to sac an agenda for. It goes without saying that a five strength four sub sentry is enormously taxing to anything that isn't Switchblade, even if it can be clicked through. And all of it's subs are high impact! Kind of. Let's break it down sub by sub. Like Archer, you really shouldn't be rezzing this if you don't expect the subs to fire.

Trash 1 program - This is a high impact sub against every good runner deck, and is probably going to be the first sub to get clicked through. However, without the power of an ETR sub, this requires another piece of ice to be effective on a remote.

Do 1 brain damage - Yay dain bramage! But you only give the runner one. And without some more brain damage to back it up, one brain damage is pretty underwhelming. So this sub is only going to be relevant to HB lists with a decent amount of support for brain.

Trash 1 console - So this sub is going to be effective against most runners. I mean, seriously, what top tier deck doesn't run a console? This sort of antisynergizes with the first sub, though. Trashing a program will free up memory for them that they can spare when they trash their console. Another one of the downsides to this sub is that once it fires once, it's more or less a dead sub - trash the runner's console, and they have no console to be trashed.

Trash all virtual resources - And now we get the weirdest subs in the game. If you're playing against a stealth deck that somehow doesn't have its Switchblade or Dagger out, congrats! Kill those Ghost Runners. Otherwise, a lot of decks run one type of virtual resource or another and this will hit maybe 50% of decks with some force. Again, it suffers from the downside the previous sub has, being dead once the runner hits it once. The most obvious synergy with this sub is the Power Shutdown - Jackson Howard - Accelerated Diagnostics combo, but then we're entering all kinds of crazy combo Christmas land.

So overall, a damn strange piece of ice. I have no clue how playable this is, and it might be very meta sensitive. I don't think it's better than Archer, but someone will find a way to make it work.

(Old Hollywood era)
junkmail 281
I think the virtual resources sub will hit Apex hard though... — Kasusfactus 11 Aug 2015
Since Endless Hunger only works against 'End the Run' subs, and it costs 4 MU to install, all of Enforcer's subs will wreck Apex not just the last sub. I can see it being splashed in some decks, 1 cred and forfeiting an agenda in exchange for destroying a toolbox or turntable at the right time would be a decent tempo shift, but at 5 strength and only 1 click to bypass a sub I'd be concerned that by the time you need Enforcer the runner could bypass the subroutines you really want to land. — TheWackyWombat 11 Aug 2015
Sadly, unlike its compatriot Archer, this piece of ice falls easily to Deus X. When you've had to pay so much to play it, any faction - especially Shaper - holding that kind of silver bullet is not great. — ninjaiguana 11 Aug 2015
Obviously also Sharpshooter, but that's the case for Archer too. Still, it means that ice has double the number of hard counters that Archer does, which is not awesome. Enforcer is cheap in credit terms, but feels vulnerable. — ninjaiguana 11 Aug 2015
Marcus Batty, anyone? — BaronZilar 11 Aug 2015
I feel like this is asking to be in a Jinteki deck in front of something like Chum. Unless they've done something to gain clicks, they can't click through all the subroutines, and you can get some damage out of it that way. Every time they want to get through that run, they'll need to pay a lot for the pair. (That said, if you can break Chum, at that point, it will go back to making this weak.) — Ranamar 1 Nov 2015
Apex can pitch his console to eat the brain damage, so this really doesn't affect him much at all. Ichi and Vikram are far scarier for him. — Parzival 26 Jun 2016
5

These days (end of 2016) we see the rise of stealth runners. Enforcer helps a ton: Trashes a stealth program. Trashes Mirror. Trashes Net Mercur. A surprised runner will click like a madman and thankfully embrace a brain damage. That's fine for me. Enforcer is anti-stealth.tech onepointoh

(Intervention era)
Hongkong Koma 265
Also, well in the Dagger's range. — H0tl1ne 17 Nov 2016
Yup, but taxes 5 creds. — Hongkong Koma 17 Nov 2016
A lot more viable option come Red Sand - the switchblade will be out, so Enforcer won't be passable for just two stealth creds. Overall, you've made a good point. — H0tl1ne 17 Nov 2016
Once Switchblade cycles this will be especially valid (provided we don't get another stealth killer with similar efficiency) — FarCryFromHuman 17 Nov 2016
Nice timing, H0tl1ne. I believe sets rotate out after Red Sands though, not as its releasing. — FarCryFromHuman 17 Nov 2016
Is that so? From what I've heard, the rotations are to happen after Flashpoint is finished. — H0tl1ne 17 Nov 2016
When the first pack from the 8th cycle (i.e. the one after Red Sands) is released, the first two cycles (Genesis and Spin) will rotate out... — Mattsetback 18 Nov 2016
It's a long time still, then. — H0tl1ne 18 Nov 2016
3

Because maybe you didn't need that second Domestic Sleepers.

Maybe bioroids really are Stronger Together (and high strength sentries are something people aren't playing enough of).

Maybe the low credit cost is compatible with your PE deck's relative lack of cash.

Or maybe you just like to play fast and mean.

Has no ETR. I know it is strong, at the end, but has no etr. The great thing is that it costs only 1 + an agenda, the bad thing is that if the runner meets this and suffers ALL subroutines in 2 turns he can play again while if he meets an archer, beh...except shapers will be a really longer thing.

Looking at this from a Jemison Astronautics: Sacrifice. Audacity. Success. perspective: it's interesting. Four subs with varying degree of threat:

Note that there's absolutely no stopping power here however. That shouldn't be a problem with Jemison though as Weyland has some of the best barriers in-faction.

Strength 5 is good, especially at 1 credit to rez. That's assuming of course that you have a way to make the agenda forfeit work with Jemison's ability. That means either an agenda pre-installed or some way to move counters later. Compared to the usual Jemison act of forfeiting on the corp's turn this makes things a lot more complicated though.

A 2 influence 5 strength 4 sub sentry that works with Jemison's ability is interesting and I think it can work in the right deck. But you'll need to figure out a way to make agenda forfeit on the runner's turn work well. If you can do this Enforcer 1.0 will be a powerful and to the runner unexpected addition to your deck.

(Station One era)
Silv 345
The virtuals should not be discounted as "Only Apex." Discount it as a meta call, but the meta is larger than that. Adam's whole ID is "I have three virtual resources installed when I start the game." As a genre Net Murcur is really a heart of stealth decks. DLR, Gang Sign, Fan Sign... these are cards that define the decks they are in. — Goldstep 16 Apr 2017
I certainly didn't mean to imply that virtuals are only Apex. It's just that most decks don't include or include very few virtuals. Though looking through the list there's one common card: Turning Wheel. — Silv 17 Apr 2017
Someone should probably check my math, but I think you can IAA a Vanity Project, then rez and use Quarantine System to rez an Enforcer, sacrificing two X/1s for 4 points. Seems good. Sadly Enforcer is not great and Archer is in faction. — FarCryFromHuman 17 Apr 2017