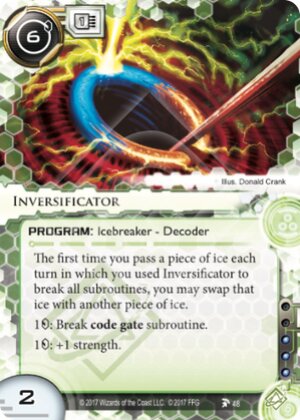 The first time each turn you pass a piece of ice after an encounter during which this program fully broke that ice, you may swap it with another installed piece of ice.

Fun toy for Kit, I would think. As though positional ICE needed any more nails in its coffin...

Anyway, if you're using this with Kit then it's guaranteed to work on the first ICE you encounter each turn. This can lead to fun situations like:

Most of this works without Kit, of course, but it's so much more universally applicable with her and hard to justify the cost without being able to eke out some serious savings in the next few turns after installing. Probably consigned to the jank bin anyway. Still a good fun way to get into servers in style, though.

(EDIT: Comments have pointed out that Adjusted Matrix is helpful in the same way that Kit is, and that multiple copies of Inversificator allow you to use it multiple times per turn! These are both good things to keep in mind)

(Earth's Scion era)
LordRandomness 236
Another easy solution to use this on non-Code Gates is to host Adjusted Matrix on Inversificator - so instead of making any ICE a Code Gate, just make your Decoder an AI. Probably just as janky, but it could work against ICE with few subroutines. — Krams 30 May 2017
You missed a big one: Install more than one Inversificator, and each one can swap one ice per turn! You'll probably need System Seizure, Dedicated Processor, and/or Stimshop, but with three of these out, the corp needs a four-deep server before you even have to whistle for your Egret. — daytodave 30 May 2017
More seriously, this is one more tool to help Kit shore up her main weakness: needing to find a killer or SMC to run two-deep servers. Its main use is going to be pushing code gates to the back of servers so she can keep running safely once they get two-deep. I actually think this could replace the killer slot in some Kit decks. This could potentially make Kit a lot faster, since she will be able to spend that time and those deckslots on other things. — daytodave 30 May 2017
I have been using this in Kit and it is a complete beast as the only breaker. Still optimizing, but I think I'll post a decklist soon if I have the time. One clarification on rules which was pointed out to me: You cannot swap the Spooned ice back and effectively skip the next ice, as awesome as this would be. The reason is that unlike Prey, which triggers at the same time as the swap ability on Inversificator (on "pass"), Spooned's trash ability triggers before that, on "break all subroutines". Thus, they are not simultaneous triggers and you don't get to pick the order. Makes me sad, but there you have it. — syntaxbad 5 Jun 2017
How does it work with Inversificator? — Vortilion 26 Sep 2018