2credit: Swap a piece of barrier ice currently being encountered with a piece of ice directly before or after it. The run continues from this new position. You are still encountering that ice. 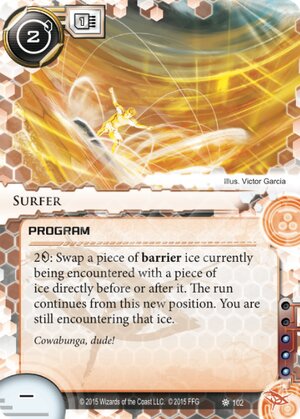 So the obvious use of this is to use an outer Barrier to surf into a server, and this probably IS the strongest use of the card. However it says before OR after, which means you can surf a Barrier forwards OR backwards if you want. Why would you want to head OUT of the server to re-encounter ICE you've already hit? There's one main reason: positional ICE.

That's right, the classic Shaper trick of reorganizing the defenses so Chum is on the inside. Now available to Anarchs! The position shift is permanent (same unfortunate reason that unless you're packing Paintbrush or other ICE subtype tweaking you can only use a given Barrier to surf in once), so once you've backed their ICE out past Chum that two-deep server suddenly looks a whole lot funnier. Pachinko outside Data Raven! Counters Sensei if anyone actually used that! Farm the Little Engine for credits...maybe...? I don't think that last one is possible outside of stupid numbers of Parasite counters (especially given that this costs two creds to activate), but it would be pretty funny to watch.

Of course, these are niche uses. The real power of this card is surfing Curtain Wall all the way into a glacier, then breaking it with D4v1d. And, of course, importing this into Shaper for use with Paintbrush and Tinkering in a deck already built to abuse those. Or Escher, which can either let you in everywhere once or create a Barrier-dense server that can then just be surfed over every run. Again, this shouldn't be the ONLY reason you're running Escher, but if you happen to stumble across both (haha, what's this SMC doing here?) it can be entirely possible to close out a game by just making everything surfable. But even without Shaper synergy, Surfer can get you into servers you have absolutely no business being able to access.

(Kala Ghoda era)
LordRandomness 226
Does swapping an ICE via Surferwith another one count as passing it? — Vortilion 19 Oct 2018
Wondering about this, if there is possible interaction with en passant after a succesfull run ... ? — theoneakaneo 5 Jan 2019
Or Spear Phishing (‘on encounter’ vs ‘being encountered’ - put another way could you use a spear phishing attack and then surf the ice all the way to where it becomes innermost and therefore is bypassed? — Joe 25 Jan 2019
4

Here is a perfect example for somthing that should be, but isnt: This Card is so obviously "Shapery Bullshit", that it brings Tears to my Eyes, when I have to pay those 3 Influence for my Kit-Deck. I don't know, why this is Anarch.

For Anachs this card would be more fitting as an Event called Tsunami, maybe something like this:

Event: Double - Run • Cost: 2 • Influence: 3 As an additional cost to play this event, spend . Make a run. The first ICE you encounter is swaped with the innermost Ice of this Server. Trash all other Ice protecting this Server. Take a Braindamage.

For Criminals i could imagine this Card as a Resource with a Effect, that gets you lots of Money for every Ice you pass on this Run.

But as it is, it should be Shaper. I mean it already IS, it just has the wrong Color. :-(

Aside from this, this Card is really incredible. Glaciers are a lot less scary, when you know, that you can just surf them. Paintbrush of corse is Surfers best Friend. Tested that on Jinteki and had lots of Fun. In one Game i was asked by the Corp-Player after surfin over a Tollbooth, if there is a way to make me pay those 3 . Nope, surfed over it! XD

(The Universe of Tomorrow era)
haywire 66
I think it all comes down to game mechanics. Shapers look a code gates as open doors, Criminals smooth talk their way past Sentries, and Anachs blow up Barriers. But I really like your idea for Tsunami. — etal05 15 Oct 2015
I imagine it was put in Anarch for at least two reasons: it would be TOO synergistic in Shaper (the best decks should HAVE to spend influence), and that it synergizes with Quetzal who doesn't seem to see as much play as other anarchs. — Sabin76 15 Oct 2015
Ya, Quetzal was my first Idea either, but it just didn't work as good as i hoped it would. Then I saw the Deck from tiedyetvortex and it felt like a revelation ^^ — haywire 15 Oct 2015
It's also an Anarch card because it fits the Anarch theme: don't play the same game the corp is playing. — FarCryFromHuman 15 Oct 2015
Does that ice refer to the Barrier ice? — TurgleBopper 1 Nov 2015
I don't think you have the Tollbooth / Surfer interaction correct. You need to pay the 3 before you can start surfing (see the old FAQ entry about the Tollbooth / Datasucker interaction) — ScrappySPJ 20 Nov 2015
Yes, I believe 'that ICE' is the barrier. — Quicksilver 15 Jan 2016
Regarding the Tollbooth: If you surf a barrier over a Tollbooth (i.e. move the barrier from before the Tollbooth to after the Tollbooth) then you never encounter the Tollbooth. If the first ICE in the server is said Tollbooth, then Surfer doesn't do anything for you. — Quicksilver 16 Jan 2016
Is the effect permanent? — NobbyNobs 7 Feb 2016