Once per turn, instead of rezzing an approached piece of ice, you may trash it to choose another server. The Runner is now running on that server and encountering the outermost piece of ice, if any. 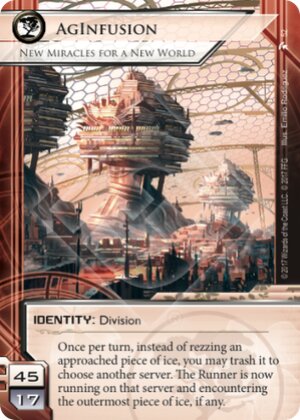 I think the most significant part of this ID is when the re-direct effect puts the runner in front of a rezzed piece of ICE. The runner must encounter that ICE and cannot jack out, which really changes how the runner has to approach their runs.

All of a sudden when they approach any unrezzed piece of ICE, they have to have the money to break any outermost rezzed ICE on the board.

If you keep getting re-directed to go through big ICE like Chiyashi, Tithonium, Archer, DNA Tracker, or even something crafty like Excalibur, it can really mess up your plans.

Nothing is quite as bad as getting redirected and paying 7 credits with Paperclip to go through the Chiyashi on Archives only to jack out after because you know there's Breached Dome waiting for you there.

The re-direct can pair really well with click removing effects like MCA Austerity Policy, or force the runner to run again on the desired server only to have it end with Nisei MK II or have them be unable to run again due to Excalibur. If they get an AI to deal with the Excalibur then include some good AI hate and force them to go through it over and over again. Maybe even consider Loki if you're including lots of miserable big ICE elsewhere too!

I think the ID works well in both a rush style along with a glacier approach. Deep servers full of un-rezzed ICE give you lots of re-direct potential, and early re-directs can waste runner clicks giving you chances to score. Either way I think this is a fairly potent ID that has a few different approaches to winning.

(Crimson Dust era)
LeNoble 14
And since Employee Strike is no longer in every runner deck, this ID is easier to use. — quailman2101 29 Nov 2017
Regarding: — mpeachey 19 Dec 2017
Regarding: — mpeachey 19 Dec 2017
Above it says:"If the Corp uses AgInfusion to redirect the Runner to a different server, what happens if there is no ice protecting the new server? Can the Runner jack out? The Runner has passed all the ice protecting the new server, so the next step is to approach the server (Step 5 of the timing structure of a run). This means the Runner will have the normal opportunity to jack out at step 5.2" Wouldn't the runner be at step 4.1 - Paid Abilities?And, this is where I get confused. If the Corp uses Ag to force the runner into an advanced and unprotected Cerberal Overwriter, can't the corp fire the paid ability at 4.1 before the runner can jack out at 4.2? . — mpeachey 19 Dec 2017