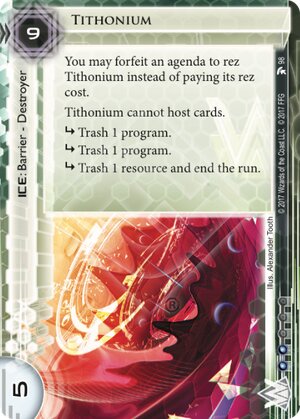 You may forfeit an agenda to rez Tithonium instead of paying its rez cost.

Illustrated by Alexander Tooth
Decklists with this card

My first thought on reading this card was, “Wow, that is insanely good.” And indeed is has quite a few comely attributes. The one problem though is Paperclip. Paperclip is a ridiculously good card, probably the best breaker in the game. I feel comfortable saying that it makes an appearance in most runner decks. Paperclip breaks this for just four. That is quite low for a piece of ICE with a rez cost of nine. Still, that will add up over time.

Now that that is out of the way, lets talk about the many perks of Tithonium.

-Tithonium is the fifth ICE immune to Parasite! Caissas and Egret too. This while still being about to host "cards" like Oversight AI, Rover Algorithm, and Sub Boost. Certainly a nice bonus.

-Tithonium is a Destroyer Barrier. Its mere existence forces the runner to have all three breakers or a solid A.I. in play before running or risk serious repercussions, in this case losing up to two programs and a resource. Bulwark is not nearly as painful.

-Tithonium can be rezzed by forfeiting an agenda instead of paying its rez cost. Use this if you are short on credits, are playing Jemison, or have a scored Standoff.

Other niceties are the fact that it is immune to Endless Hunger, it only costs two influence and that the card is named after a big @ss canyon on Mars.

Watch out for Knifed, Sharpshooter, and derez effects.

(Free Mars era)
quailman2101 254
Immune to Endless Hunger. Yet another card that serves to demonstrate that Apex is meant to be nothing but a sideshow joke. — FightingWalloon 14 Aug 2017
0

Tithonium is the first time I've seen ICE that has an alternative rez cost (instead of an additional one). For Tithonium you can either pay 9 or an agenda. Since 9 is a lot compared to other ice I expect Tithonium to only be used with decreased cost rez cards like Oversight AI or (and more likely) Jemison Astronautics.

There are 3 subs on Tithonium and most runners will want to break them all. At 5 strength that makes for a pretty decent mid-high range barrier.

Additionally because Tithonium can't host cards it's immune to Parasite, which is always nice. Unfortunately due to the high rez cost (one way or the other) it is more vulnerable than most cards for derezzing and criminals have gotten a lot of derez options over Terminal Direction and the Red Sands cycle.

Compared to Archer Tithonium has one less sub (though the first sub on Archer is one that's easy to let fire for runners) and has one less strength. On the other hand when paying with an agenda it costs a whopping 4 less than Archer.

For most decks Tithonium will be a pretty bad option, if you can't pay with agenda's it doesn't have a good price/power ratio. I do see potential value in Jemison, especially as an Archer alternative.

(Free Mars era)
Silv 316
Most brutal facecheck ICE don't have a good price/power ratio and this one is one of the scarierst ICE ever to face unprepared. It can throw the runner back big time if he runs without a fracter, especially if he/she already has the other breakers out. — Krams 24 Jul 2017
This would also be right at home in a Skorpios Only Barriers deck. You've already accepted losing agendas as a way to further your boardstate the second you slotted in Hunter Seeker. And I'll happily forfeit a 5/3 if I'm reasonnably sure that I can permanently kill your fracter. — Akanthinos 25 Jul 2017