subroutine The Runner cannot make another run this turn.

There drew he forth the brand Excalibur,
And o'er him, drawing it, the winter moon,
Brightening the skirts of a long cloud, ran forth
And sparkled keen with frost against the hilt:
For all the haft twinkled with diamonds sparks,
Myriads of topaz-lights, and jacinth work
Of subtlest jewellery. -Lord Tennyson
Neutral • Andreas Zafiratos • The Source 111
All sets:
Links: Decklists | ANCUR 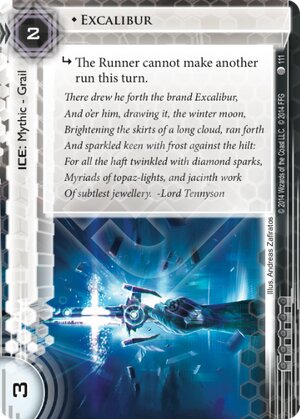 Trap, because Excalibur notably has no ICE type. It cannot be broken except by AI breakers.

Excalibur, instead, hangs out with the Upgrades. For a measly 2 credits, Ash 2X3ZB9CY, Red Herrings, and Caprice Nisei, along with other strong Upgrades that typically require a second clean run, become maximally efficient. Excalibur + Red Herrings in a server means that the Runner will pay those 5 credits.

Ultimately, try to separate this card from the Grail subtype. In fact, I would instantly cut it from decks running the actual Grail ICE. I firmly believe this card is strongest when slotted into Glacier-style decks that intend to score in a remote, who naturally run powerful Upgrades to protect them.

(The Valley era)
hi_impact 1709
I want to like this review twice. Totally accurate and very insightful review. — Ber 24 Apr 2015
Orrrrr you keep it in your hand and reveal it with every other Grail Ice, they'll all pick up the "cannot make other runs" subroutine. In fact, all Grail Ice benefits from having a lot in hand, so pack some handsize expanders - Research Station or Cybernetics Court. — fetish 20 Nov 2015
I wouldn't cut this from a deck with 9 Grails. It can be tough to get and keep 2 grails in hand while trying to lay out ice. A 10th one would be good for that, it would also be good on the scoring remote in combination with Caprice or something. All in all, still worth keeping in a Grail deck I would say. — Raiddinn 7 Jul 2016
8

I have found this ice to be particularly great in RP as the runner is forced to run a central server. Plop it down in front of HQ and/or R&D while having your score server ready with an agenda. Rez it when they run either central server and BAM, an open scoring window. Make sure that that you have Swordsman out in case they are running AI breakers, they only thing that can stop this ice in a hurry.

(The Source era)
dpolishsensation 34
Its better on your scoring remote where excalibur and nisei tokens or caprice can lock them out for the rest of the turn. — king_mob 24 Apr 2015
I have also taken to putting it on a central (along with Uroboros, considering this is unique) instead of a remote. I'll have to try this on the scoring remote, though. With Caprice + Ash + Nisei tokens, that server is on lockdown. — Sabin76 6 Jul 2015
Excalibur is unique - but can you also reveal it from your hand if you have one copy installed? — fetish 20 Nov 2015
I don't see why not, but it is much more likely to get broken when revealed. Because it adds the routine to an ICE with an 'ordinary' type. — Quicksilver 23 Jan 2016